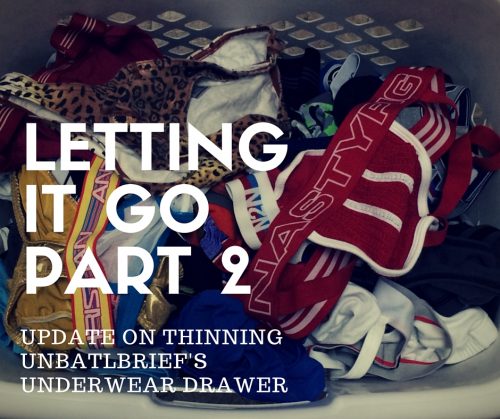 A couple of weeks ago I wrote about the struggle I was having with getting rid of undies that I no longer wear.  I had gotten as far as sorting out the ones I wanted to keep and those I needed to toss.  That was it.  I just couldn’t do it.

Fast forward to tonight and I’ve actually made some progress.  I managed to get rid of about 50 pairs.  Gave them to two fellow underwear lovers who are a little but younger than I am  (damn millennials) and don’t have as much disposable income to buy all the underwear they’d like.  I consider it a charitable donation.   Too bad I can’t right that off on my taxes.

This purging of my collection gave me the chance to take an inventory of what I have.  I thought the amount that I got rid would make a sizable dent and free up googobs of drawer space; I seem to be wrong.  Today’s underwear count is as follows: 39 thongs, 40 jocks, 45 bikinis, 53 briefs.  177 pairs of underwear.

Add in the days where I go commando and I could go over 6 months without wearing the same pair.  That’s just cray-cray.  No one needs that much underwear.  But I guarantee you that in the not too distant future I will get the itch and find something new to buy.  Damn underwear sales.  They get me every time.  Besides, can you really have too much underwear?