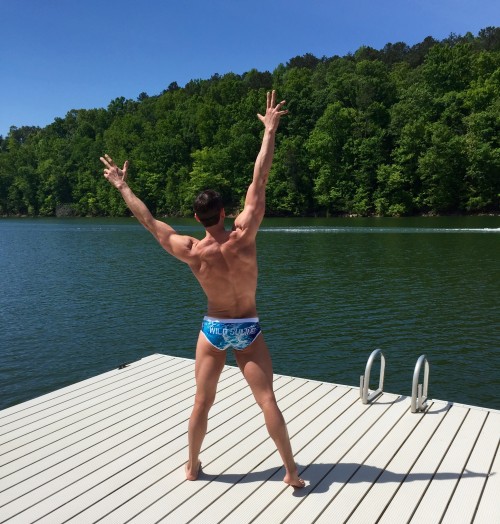 I want to start this segment by acknowledging that (hopefully) years down the road. The stigma associated with swim briefs will be extinct. and this post will merely be a record of our archaic social state.  I know that was a little heavy. Let’s face it, swim briefs currently are not socially acceptable in the States.  Americans are fearful of the “banana hammock” style swimmers. It’s not only a damn shame, it’s an epidemic. Which is why I am inspired to write about my first experience wearing my swimmers at the beach.

I remember the experience quite vividly. It was Labor Day weekend and my girlfriend and I went to Zuma Beach to celebrate her birthday.  We got a hotel for the weekend and while I was packing my bag for the trip. My girlfriend encouraged me to bring the slate grey swimmers (swim briefs) I bought from Manus.  As apprehensive as I was to wear them, I decided to bring them along in good faith.  As fate would have it, my girlfriend swindled me into wearing them under my board shorts, aka parachute pants.  Just in case I worked up the nerve to sport them.  When we got to the beach, it was a typical scorching hot California summer day. My black board shorts weren’t making the cut.  Within an hour of being uncomfortable in my board shorts. I decided to make a utilitarian decision and opted for the breathable and unrestricting swim briefs. In lieu of the baggy, rigid, hot, unsupportive board shorts.  Let’s just say that since I’ve made this decision, I haven’t worn board shorts again.  It was crystal clear to me why swim briefs exists, and not just as a cliché laugh to conservative America.  Initially the swimmers felt a little foreign to me. Due to displaying parts of my body that have never been exposed to the public. But that was short lived as the comfort factor set in. Prior to this experience I only ever swam in shorts. So I had no clue how awesome they were to swim in, which is why I refer to swim briefs as “swimmers”.  The revelation was earth shattering.  From then on, it has only made sense to wear swimmers.

As an underwear fanatic. I had always been curious to wear swim briefs. It’s interesting to me why I was so fearful of wearing them in public in the first place.  There are many theories as to why the social stigma surrounding swim briefs exists.  I am not going to bore you with them. But I want to at least want to clarify that there is a derogative association with swim briefs in the States.  Men are afraid that the moment they put on a pair of swimmers. The whole world is going to point and laugh/taunt them. Their picture will be published on all social media outlets.  Not the case.  Now that I wrote it out, it seems a little narcissistic and insane, but it’s the truth; men think like this.  It didn’t take me long to figure out that no one cared about me, let alone what I was wearing.  It could be because I live in LA and everyone is too cool for each other.  It could be because I wasn’t the only person in Malibu wearing swimmers.  It could be because people were too preoccupied enjoying time with their friends and families to worry about my swimmers.  It could also be because no one genuinely really cares. All of my worries were internalized fabricated fears.  I know my experience might not always be the case with wearing swim briefs. There may be an occasion where some Joe Shmo feels it necessary to speak his opinion in public to discourage you from wearing swimmers.  If you think about it. Someone who actually has the time to be concerned with your wardrobe and makes the effort to call you out. They clearly has no respect for individuality. The guy certainly doesn’t have the capacity to know how to act in public.  At any rate, I just want to clearly make the point that after I ripped off my board shorts (as self-absorbed as it may seem). I was a little self conscious and I felt that all eyes were on me. But in reality no one cared and it didn’t take me long to come to this realization.

Since my first experience, I have worn my simmers to beach countless amounts of times.  My collection has expended quite drastically.  One of the pros of having so much swimwear is that it incentivizes me to wear them. I want to look good in them, so I am more motivated to make time in the week to exercise and maintain my body.  Now that I exclusively wear swimmers. The excitement and liberating effect of wearing them is nearly gone. As they seem natural and normal to me.  What has remained is the empowerment of choosing to wear what I want to. Because that’s what I want, and I’m going to do it with confidence.  As a man, it’s empowering to be proud of my manhood, not in a chauvinistic prickish way.  But in a comfortable and modest sense.  Just like how women have the confidence to display their bodies at the beach. Men should be comfortable enough with their bodies to wear more revealing swimwear.  It’s like my girlfriend states, “do you think men would find women attractive at the beach if we wore shorts that went below our knees(?).”  Probably not for most dudes, and it makes sense.  Most guys are programmed to think if women see them in swimmers, they will be considered gay.  But can’t men also assume that at a primal level, wouldn’t a man’s package be of interest to the opposite sex?  Just like women’s breasts and butts are to men?  Just food for thought on the swim brief angle. While I’m on the topic I want to clear up one last stereotype associated with swim briefs.  It is not true to assume that someone who is wearing swim briefs is gay.  I could write a novel about the derogative association of swim briefs and gay men. But I’ll save it for a “Brief Talk” segment I am working on with UNB Tim.  I will say that I think it is true that more gay men have the confidence and choose to wear swim briefs. But there is no direct correlation between being gay and wearing swim briefs.  All men can wear swim briefs.  And they should.

Whether you’re gay, straight, bi, big, small or whatever. As men we need to unify and be proud of our bodies and have the confidence to display it.  Typically in America we are ahead of the times. We drive the current technologies and trends. But we are far behind on this front; especially compared to many other countries.  Maybe I am being optimistic, but every year I see more men wearing swim briefs.  Hopefully it won’t be long before all men agree to wear comfortable, supportive, and fashionable swimwear.