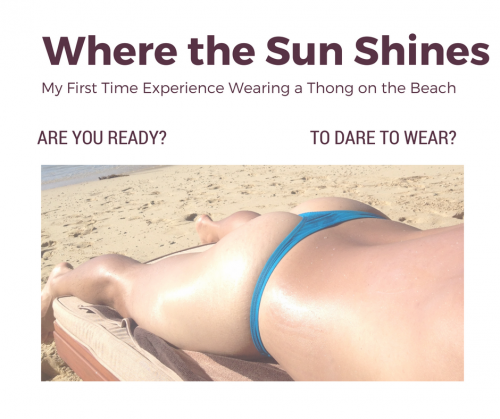 For some reason wearing a thong created somewhat of an exhibitionist of me. Kind of like how when you get a new outfit or a funky new hairdo, you want people to notice and compliment you in the ways you’re trying to stand out from the rest of the pack.

On less than a handful of occasions, I’ve seen a guy on the beach wearing a thong. I’ve always wanted to go up to them to let them know how awesome I thought it was that they had the courage to wear one on a public beach for one and all to see. I envied that courage.  To date, I’ve only had the courage to bare my thong on semi-private beaches.

The first time I intended to wear one on the beach I wasn’t sure I was going to go through with it. I put on my blue Joe Snyder thong, one that doubles as both underwear and swimwear. Over that I put on a pair of gym shorts, which felt rather fantastic to wear over a thong might I add, and a light colored summery tank top. I loaded up my backpack with some water, reading material, and hiking boots (I’ll explain) and hopped in my car feeling both nervous and excited.

The beach I chose to go to was a nude beach called Black’s Beach in San Diego, California.  I figured this beach offered me the best opportunity of feeling comfortable enough to wear a thong since nearly everyone else would be stark naked. I wouldn’t have to worry about my peers judging me or scaring any kids.

Getting to Black’s Beach isn’t exactly easy.  You either have to go to the beach just North or South of it and walk there during low tide or you can hike down a rather steep and rugged trail directly above the beach.  Being in my late twenties at the time and in relatively decent shape I chose the trail and hence the hiking boots.

I got down to the beach and it was a perfect Southern California day. The kind of day that would feel real nice on bare skin. There weren’t too many people on the beach because it was still relatively early in the day so I found as private a spot as I could find and laid my towel down.  One deep breath and away my shorts went.

It was exhilarating really. My heart was beating out of my chest and I was smiling from coast-to-coast. I laid down on my stomach and just kind of took in the moment. I literally said out loud, “this is awesome!”. The sensation of the gentle breeze and the warm sun on my bum was amplified by the newness of the experience. I laid my head down, still smiling like a complete idiot, and began to succumb to the newfound comforts of sunbathing in a thong.

Oh my goodness, I can hear someone walking down the beach! They’re going to walk right by me! Stay calm. Quit freaking out. You’re on a nude beach for christsake man, relax. Just act cool, no big deal. You’re wearing a thong; showing some skin; so is everybody else!

My heart was definitely racing. I kept my head down but my ears had turned into NASA spec satellite dishes tuned to the direction of the beach walkers. I was just waiting for some kind of whispered comment remarking on how gross that guy is for wearing a thong.

They came and they went. No remark. No nothing. Just casual conversation between two people walking on a beach on a beautiful day.

Every person that walked by, my near heart attack lessened and lessened until my mind and body shifted back to that warm California sun.

It wasn’t long before I had the courage to get up and jump into the surf for a little while. Again, this new sensation of the cool ocean water enveloping my skin uninhibited by board shorts was simply amazing. It was freedom. It was joy. It was self-discovery.

So, I wore a thong to a nude beach. Kind of cheating right? I kind of feel like it is anyway. There is a beach much closer to my house than Black’s Beach. It’s the one I frequent most of the time when I go to the beach. It’s a gorgeous beach with the perfect amount of sandy shoreline in between some pretty cool beachfront properties and the Pacific Ocean.

It was the middle of a work week and I had the day off. I thought it a fantastic idea to hit the beach for a few hours because it was the kind of day where the ocean was calling to me.

Middle of the week. Day off. Sparsely populated beach.

On went the blue Joe Snyder thong. Over that, blue Joe Snyder briefs (insurance man), and over that, the socially acceptable board shorts. Let’s see how many layers I’ll peel off when I get there.

I got there and there were slightly more people than I was expecting. Can’t blame ‘em, it was a postcard day. I searched and searched for a spot I would feel comfortable in wearing a thong. The best I could do was a spot with a solo, 20’s – 30’s, female who was getting some sun in her bikini within about 30 feet. It wasn’t a thong. I’m not sure if it would have made a difference in the outcome, but I thought it worth noting.

Well, I got down to the briefs. I just couldn’t pull it off. It made a huge difference to me that there were more people than at Black’s and that they all had on “normal” swimwear. I agonized over my lack of courage for a little while. But then I closed my eyes and enjoyed the sun.

Someday, I thought. Someday for sure, I assured myself.

So what would it take for that someday to be today?  It’s a great question really. I think for me the biggest obstacle is body image.  If I feel I look fantastic in a thong then I think I would have way less of an issue wearing a thong more publicly. So I have a lot of work to do, probably mostly emotionally, but also in the gym and in the kitchen. And to be honest, feeling ready to wear a thong on the beach, any beach is a pretty good source of motivation along with my desire to please my wife by wearing one.  My previous experiences at Black’s and wanting to see my wife excited about seeing my cheeks on the beach are powerful sources of motivation.  My weight fluctuates like the ocean tides and I have been in a leaner form before. So every day I grind to get back to that place of confidence and free-spiritedness that I enjoyed previously.

Am I implying that men shouldn’t wear thongs on the beach unless they’re underwear models? Of course not! This is just my issue.  I am straight up proud of any guy, any shape or size, who has the confidence to thumb social protocol and bare those cheeks on the beach.

I often think about organizing a beach day for all the guys, and their girlfriends or boyfriends, in my little corner of Southern California who want to wear a thong on the beach but just haven’t had the courage to.  Maybe we can all benefit from a collective source of courageous energy. What an amazing day that would be.  Someday for sure.

The thing with saying Someday about this or anything else for that matter is this:  Tomorrow, and thus, Someday is never guaranteed.  So YOLO man!  This goes for me as much as anyone else:  Fellas, if you want to wear a thong on the beach, do it! If there are obstacles in your path to doing so, destroy them, demolish them, annihilate them and feel that sun on your buns!