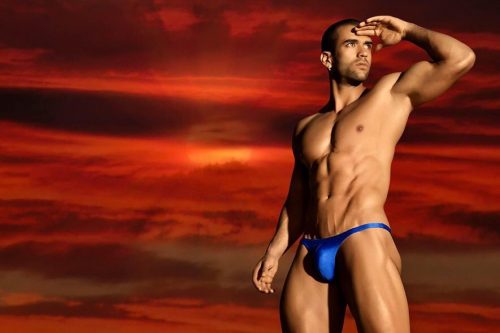 There has been a lot of discussion about straight guys who love underwear, including thongs, on Underwear News Briefs. While this shouldn’t present a problem in and of itself, telling your girlfriend you like thongs can be a trickier matter. For me, it was a little embarrassing coming clean about wearing thongs when she doesn’t even wear thongs herself.

Out of the blue, I had decided to go all in and wear my favorite Joe Snyder thong to our fourth date. I remember feeling the thong and getting more and more excited about the big reveal as the night went on. When the time came, we continued doing what we had been doing as if nothing changes. This was very heartening and such a relief. Underwear is a big part of my life, so it felt great that I could be now be open with her about it without fear of rejection. Although my thongs were a relatively harmless secret, with that there were no more secrets between us.

After the fact, I asked her what she thought of the thong. She said she already had an idea I had unique tastes in underwear because of my large underwear drawer, so she wasn’t shocked by any means. In addition, she added that since it made my bulge look great, showed off my backside, and was something I liked wearing, she couldn’t complain. I couldn’t have asked for a better reaction.

To any guys in a similar situation, I would say that you should never be afraid to put yourself out there and share your underwear love with you significant other. If they react badly, then the relationship probably wouldn’t work out anyway, because they should like you for who you are, not what you wear. In the end, I realized you should never be embarrassed by your underwear preferences because underwear is meant to be comfortable and stylish.

Picture by Joe Snyder US.