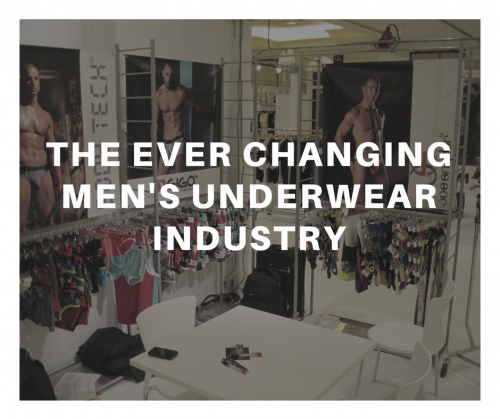 Just this week a brand that we have covered announced they are closing. Underweardude pointed out in a private chat that JM announced it was closing. I was like WHAT? This year has seen some major changes in the world of men’s underwear. It’s been an odd year. This just compounds onto the year.

I have been doing UNB for almost 9 years. In that time I have worked with hundreds of blogs and have ones that I have gotten to know. Working closely with them over this time I consider them friends and not just people I work with on the blog. This may seem odd but, but the men’s underwear industry is a rather close knit market. Everyone knows everyone and for the most part get along.

At Magic you can see a lot the brands in Underwear Alley, get together between appoints and talk. Not necessarily about underwear but just be friendly. This is one thing I love about this industry. At these shows relationships are built and strengthened.

Every year brands come and go. I have a running list of brands that have ceased production. This year seems to be a lot more brands either closing or selling to someone else. Here are some of the brands that I will personally miss working with the owners/designers.

There are a few other brands that I have talked to that are weighing options. I was a little down but then I talked to Hashtag Hooker this week. When talking to the CEO/Creative Director Andreu, I realized that the community will continue with new brands. And that change can be a good thing in the long run. But, let’s face it we all hate change, especially if our favorite underwear company closes it’s doors.

If you have a favorite brand show them support. Give great reviews of their pairs of underwear on their site or Amazon. Interact with them on social media, you may score some goodies! Join their email list so you know what they are doing. Lastly, buy from them! Especially through their own site.

This is not to be a post of chicken little saying the men’s underwear industry sky is falling. Just a lot of this news has knocked me off my game. I realize that I can’t hold on to the past and must embrace the new changes and brands. UNB will carry on and keep sharing great underwear and gear!