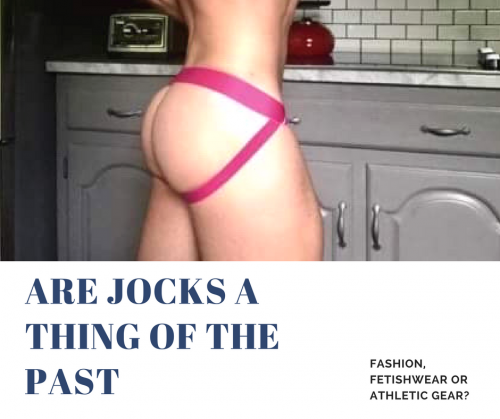 Jocks have been around for over 100 years. They started out for athletes and in the 70’s it came to the gay fetish world. The 80’s saw some advancement to the style. It was available in colors. The colors were mainly black, red and blue. However, there were brands making other colors. It wasn’t until the late 2000’s that jocks really went more “mainstream.” I called 2009 the year of the jock. Every brand had them and they were no longer work out/athletic gear but a pair of fashion underwear.

Since 2009 the jock isn’t in as many collections. In the world of athletics, UnderArmour has taken over and certain sports now don’t even wear the classic style anymore. In our reader polls and through friends of the blog, I have had a few talks with guys (gay, straight, and bi) on the style. It tends to be the gay guys who love and still wear the jocks. Now, this is not a scientific study but more of an observation on my part.

I am on a few gear sites and it amazes me how many young guys never owned a jock. When you ask them if they wore them in sports they said they would wear UA gear. It’s more about compression gear than the jock. I remember playing little league and being given my first jock. I have a few friends on the sites who told me when they buy their first jock. Most of the times these guys are buying it for the fetish side and not for everyday wear.

Straight guys have bypassed this pair and gone straight to thongs. I asked one of our long-time readers why this is and he told me that his gf/wife didn’t get them. They think the style is silly. They would rather see their man in a thong. This has been echoed by several guys. On top of that, most of them find the thong sexier than a jock. It’s a matter of preference with them and their partners.

Innovation is being done on the Fetish Side

When you see what innovations are happening in the world of jocks, it’s on the fetish side. Look at brands like Cellblock13, Nasty Pig, 4 Hunks and AD Fetish. Each of these brands has some of the best jocks on the market. Timoteo’s Cellblock 13 has fully embraced fetish and been making neoprene jocks with matching harnesses. Which are super hot, well to me. Then you have Nasty Pig making jocks for fetish and fashion. They have done many colors, prints and more. And one that is really making statements is 4 Hunks. They are mixing elastic and mesh! (We will some reviews on them soon). Lastly is the new kid on the block Addicted Fetish.

Is the Jock just for Fetish or does it have a future?

I don’t think the jock is done yet. There are guys who still love the pair and it’s all they wear. It’s always had a place in the fetish world and that won’t be changing anytime soon. Like other things in life, it all happens in cycles. Just the way boxers/boxer briefs are popular, we will swing the other direction. Plus, there are still lots of brands making the pair. Such as C-IN2, JOR, Cocksox and more. I think we will have three areas. The first will of course be Fetish. The second will still be old school athletic jocks in athletics. And the last will be fashion.

If you have an opinion, let us know!