Ok first off I think this is a first, three posts in one day. Whooo hooo. But this is a posted I wanted to do earlier this week. First off, if you listened to my podcast you’ll know that Erogenos has agreed to let me post pics from their site on here. And I’ll tell you what specials and sales they have. I haven’t ordered from them yet, well I tried but the credit card I used was at the limit. So I didn’t get what I want. But every time I have contacted them they have been great and have awesome customer service. 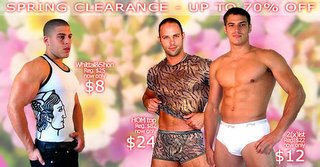 Ok first up is some clearance news. Audace has a spring clearance event going on . Its mainly over JM gear. Both undies and swim wear. It’s not bad, if you need a new suit for summer check them out and they will have what you need. I gotta get in shape before that happens. They do have a few CK, Unico and HOM brands as well. But the JM suits are pretty cool. I wish I had money to get some. All pretty good. 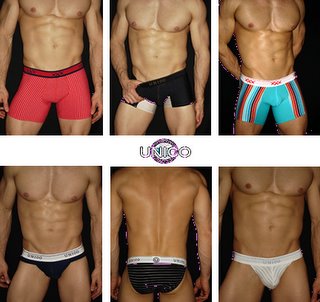 Pics from Erogenos used with permission.

Next up is new undies from Unico. Man these undies are smoking, I so have to get a pair of Unico. I hear they rock, especially for guys with a little more up front. I have also heard buy a size up from what you wear, they run small. I think Unico makes the best undies as for style lately. They make some great boxer briefs and briefs. As many of you know I hate boxer briefs because they ride up and don’t give good support. But these are the kinds of boxer briefs I like, very tight and they have a built in pouch. I think all of Unico undies have a pouch. The top row are the new boxer briefs, I love all of them, I think they are really innovative in their colors too. I’m so tired of black, white and grey undies. It’s time we got color back in men’s undies. Unico has always used bright colors and interesting color combinations. The briefs are hot too. They are small and sexy. I love briefs that are just that. I know many out there don’t but as I’ve chatted with some guys online it’s time we really talk about undies and talk about styles other then briefs and boxer briefs. I”ll keep you posted when I get a pair. Next post on undies I’m going to tell what I like and why. I hope I’ll have some discussions on the types of undies, plain white briefs, bikinis, boxer briefs, thongs, boxers, jocks and sports gear (such as compression shorts and UnderArmour). I definitely am interested what you guys think too. As you can tell underwear is one thing I really love.