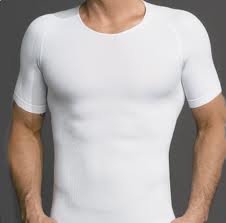 A crew neck (or crew-neck) is a type of shirt that has a round neckline and no collar, often worn with other layers. The T-shirt crew neck was developed in 1932 as an undergarment that would absorb sweat and prevent shoulder pads of American football players from causing chafing. The U.S. Navy was the first U.S. armed forces to adopt the crew-neck  T-shirt or “Gob Shirt” (cited from Wikipedia)

The  cre neck, “Gob Shirt,” or undershirt as it is known today continued to gain popularity throughout the 1940’s and by the 1950’s  James Dean has created a legend. Dean turned heads in Hollywood, not by dressing up but by dressing down. His casual style teaming the basic crew with denim and a red jacket when he portrayed Jim Stark in ‘Rebel Without a Cause’ was considered uncouth at the time. However once immortalized on screen, James Dean had cemented a rebel

uniform for his generation, and for many more to come….

To this day the crew neck is still considered a fashion essential amongst everyday men.

So when Equmen decided to launch their version of the iconic undershirt, the vision was clear. Head Designer Carolina Ale states ‘we wanted to take the legend of the crew and modernize the fit the needs of today’s man” says Ale.

This modern take on the classic crew neck tee will ‘help reduce neck and back pain, strengthen and support core muscles, improve you posture, enhance blood flow and circulation as well as regulate your body’s temperature making sure you stay clean, dry and supported all day,’ says Equmen’s CEO Anthony Pavlakis.

The shirt comes in black, white and new slate grey. Find them all at the Equmen site