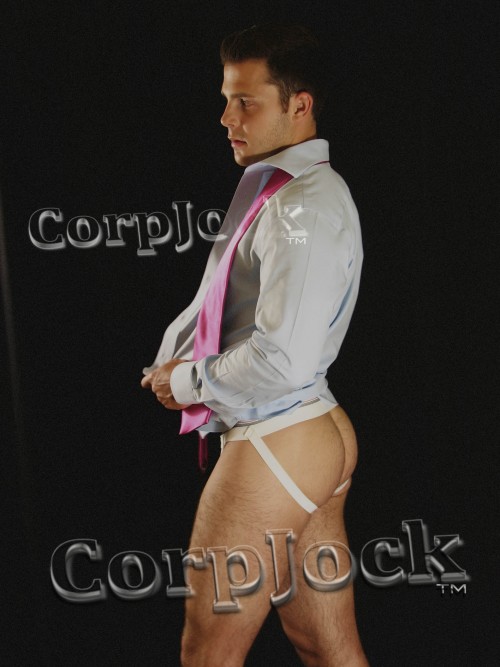 We love bringing you guys new models and photogs. Especially up and coming models and real guys in underwear. We have teamed up with Corp Jock to showcase some of their pics and new guys. This is first one. Here is a bit about the shoot:

Part of the creative aspect of my work is that I showcase the athlete that resides within. The guy you’re seated next to a white collar board meeting could be sporting a jockstrap under those pinstripes. Might that possibility make the agenda more interesting?

These images are from a photo shoot done with a young executive who wanted to showcase his athletic physique – the one he needed to keep under the wraps of his business suit for his Fortune 500 investment firm.

It’s pretty obvious why he wanted to document his efforts to keep in shape, so I suggested that we play off his being in a business suit, slowly removing it to reveal a jockstrap underneath.

He admitted to me that he didn’t own a jockstrap. In fact, he had never put one on before. It was pretty hard to imagine that nowhere in his schooling did he ever have a phys ed teacher who insisted that he wear a jockstrap to class. But in any case, we selected from a few I keep on hand for shoots and he was especially interested in the one that allowed for a protective cup to be inserted.

This new experience afforded us a much more creative and interesting shoot than I had originally anticipated. Here are a few of the images that we can share online.

For more athletes as art and to book your own CorpJock photo shoot, please visit: corpjock.com