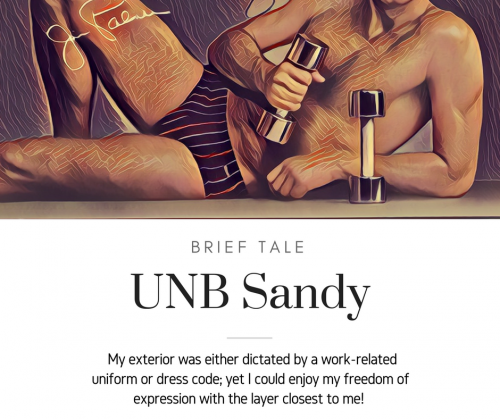 I attended a boarding school in Florida during the 1970s and while there was a dress code, I discovered that I could express myself with underwear, and consequently found very early brands that used color and fabric that weren’t the typical white briefs that I had worn my entire life. I recall having a package of Hanes that were colorful, trimmed in contrasting colors, were soft, and cut in a very short boxer brief or trunk style. I literally wore them out!

During my college years, I lived in Chicago and discovered that some of the trendier department stores had more adventurous styles of underwear — Elance and Poco — and I started wearing colorful bikinis and briefs. Again, a similar theme, my exterior was either dictated by a work-related uniform or dress code; yet I could enjoy my freedom of expression with the layer closest to me! Plus…it made me feel sexy as hell! Still does! Hence, the REAL reason I love underwear — it’s fun to get dressed and it’s often the first thing I pick out! The ads with Jim Palmer and Marky Mark were huge incentive to expand my selections and they contributed to the idea that good men’s underwear was a mainstream commodity!

My first venture into high-quality underwear was Calvin Klein (no surprise!) but then discovered 2XIST, CIN2, N2N, Andrew Christian, Cocksox, and Obviously, which today, are my “go to” everyday underwear. I usually wear briefs but love to mix in a thong (CK and N2N) or a jock (N2N, Aussiebum, AC). I love quality, design, color, and pouch. I also like supporting brands and designers that are trying new things, pushing styles and fit.

NOTE: UNB Sandy is one of the newest members at UNB. He will be speaking to guys over 50, showing them no matter your age, you should wear great undies.