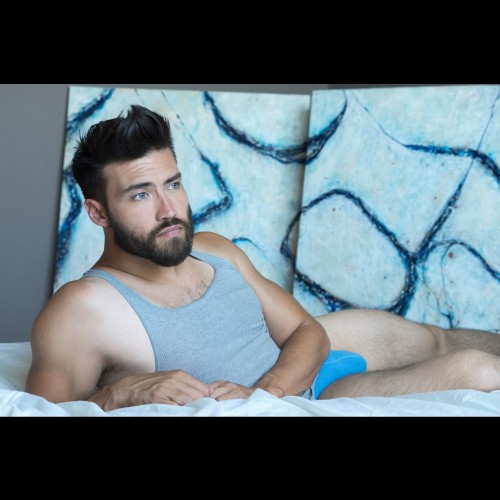 We ran a profile on Austin Tacious a few months ago in our Model profile series.  We always encourage our friends to keep in touch and let us know their new endeavors.  Austin emailed me this pic and it’s too good not to post! Enjoy! 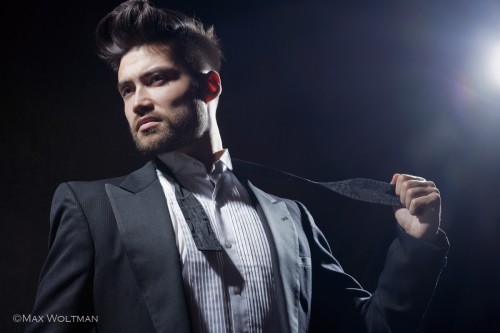 The one thing I love about doing these model profiles is the wide range of models that I have come in contact with.  This next model I happened to run across one morning while looking on Tumblr and immediately sent him a message to see if he was interested in being featured.  Meet Austin Tacious.

UNB Kyle:  I got a taste of some of your pictures on tumblr.  What was your first modeling gig and how did you come to get it?

Austin:  My first paid modeling gig was a BDSM shoot for a corset and leatherworking company. A friend of mine put them in touch with me and basically asked if I wanted to make a bit of cash in exchange for letting them lace me up. The shoot itself was kind of a nightmare.  I was told that I just needed some slacks and boots for the shoot and upon my arrival it was revealed to me that I would be needing the boots but it was expected that I would be in a thong.  I thought they were joking, but it turned out that they were serious.  I explained that I was told that the shoot would be clothed, and that I did not just so happen to be wearing a leather thong or jock. They asked if I could do the shoot in the undies I was wearing. Much to their displeasure, I was wearing some tartan boxer briefs.  They wound up asking my waist size and ran out and purchased some briefs that did not fit quite right and lead to my accidentally exposing myself all day.

Kyle:  I am sure that is not how you imagined your first gig going but look at how you grow from it.  What made 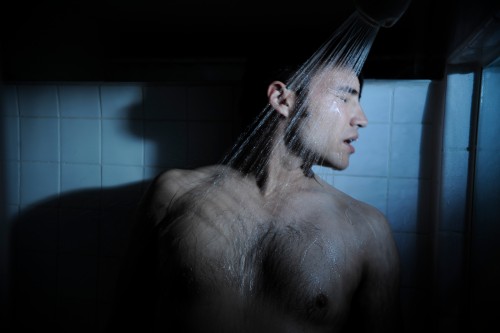 you want to pursue modeling?

Austin:  A lot of encouragement from a former lover as well as from a late friend of mine. After doing it for the first time and seeing some of the images I grew to appreciate it greatly as an expressive outlet.  I am always stoked to be a part of a project that can evoke feelings in the viewer. After seeing the images from some of the shoots, I only became more interested in taking on more projects.

Kyle:  It is fascinating to put so much emotion into one photo.  Which shoot do you consider your breakthrough in your career?

Austin:  I don’t know so much about my career, but in a personally meaningful breakthrough, I would have to say that the first nude shoot I did with Max Woltman was probably it.  The shoot was a huge step in my confronting and dealing with body dysmorphia. Since then, most of the shoots that come across my desk have been nude work. 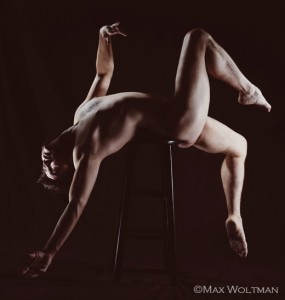 Kyle:  That is wonderful and I think what you did is courageous and many people admire you for that.  We get stuck in what we think a model should look like and there is so much more beauty than that.  Which shoot has been your favorite? Why?

Austin:  My favorite shoot was really spontaneous. My friend had a sudden cancellation and he asked me if I was free. I didn’t have any plans and lived just a few blocks from his studio so I took him up on it.  Neither one of us had any expectations or anything planned which allowed things to happen organically and we both really liked the results.

Kyle:  That was probably fun because you didn’t have any time to think about it and just accepted the moment.  Which shoot has been your most challenging? Why?

Austin:  That would have to be a shoot I did with a really great photographer named Daniel Peebles.  He wanted to feature performers and had contacted me.  We did a shoot with me in my lyra, which is a steel hoop suspended from the ceiling, and the specific pose I was holding had over the time we were shooting made it increasingly difficult.  In 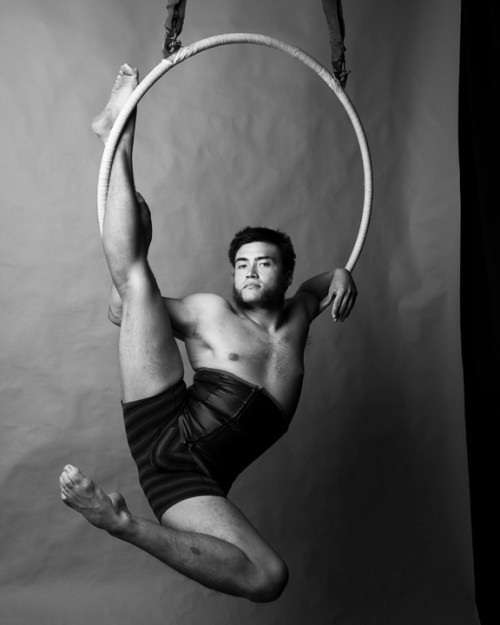 the end I was bloodied but it was worth it.

Kyle:  I guess that is when the saying “no pain, no gain” comes into play right?  How about your most embarrassing photo shoot situation?

Austin:  That would definitely be getting an unwanted erection during a shoot. I believe I actually said, “Sorry, sometimes I wish I could leave this thing at home.”

Kyle:  I am sure that happens more than you think with other models!  You were clearly just excited for the opportunity!  Are there any brands or photographers you would like to work with that you have not worked with yet?

Austin:  I am always excited to work with new people! There are easily more than I can mention. As far as brands go, I think it would be really awesome to be asked to work with any brand!  Photographers I would like to work with? I would really dig being able to work with folks like Tim Walker, Mike Ruiz, David LaChapelle, and Predrag Pajdic.

Kyle:  Hopefully that chance will come for you.  What is something that your fans don’t know about you outside of modeling that you want them to know?

Austin:  My regular day jobs have proven to be soul crushing and disheartening. After all my time an effort I put in to becoming college educated and get my degree, I’m planning to run away and join the circus.

Kyle:  Yeah, welcome to the real world and life as an adult after college!  What kind of diet and exercise do you do to prepare for shoots?

Austin:  I am a fairly active fella in general. I hit the gym about 4 days a week and between that, martial arts, circus, and dance, I stay in a good place that is functional.  As far as diet goes when I have a shoot coming up, I try eat exceptionally well and avoid alcohol, if for no other reason, than out of fear I will not be up to snuff when it comes time for the shoot.

Kyle:  I love the avenues you have for exercise such as the dancing and martial arts.  But I know you have a weakness so what is it?

Austin:  I am a sucker for green chile cheese fries. 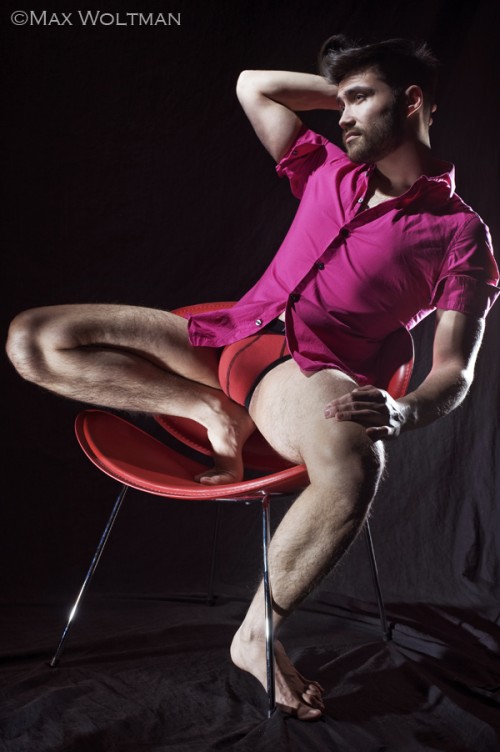 Kyle:  As an underwear blog, we always want to know what you have.  Looking at your underwear drawer, what is it made up of?  % boxer briefs, % briefs, % jocks, % thongs.

Kyle:  And outside of that drawer, what is the craziest pair of underwear you have ever worn?

Austin:  I think it would probably have to be a pair of peacock feather patterned trunks covered in rhinestones I wore for a burlesque act.  The rhinestones made them very heavy and I was concerned that they were going to come off while I was dancing.

Kyle:  Sounds very elaborate though!  Finally, you have had experience in underwear and nude.  What goes through your mind right before you have to do these revealing shoots?

Austin:  If I am to be honest, no matter the shoot, I get pretty nervous beforehand. I want to make sure I do everything well enough, make sure it is worth both my time and that of the photographer, that sort of thing.  For revealing shoots I run the gamut of universal worry.  I hope I get along with the photographer, I hope we get a good shot, have I eaten right, is my hair alright, worrying that I am not muscular enough, fearing that I look to have a gut, worrying that I look to be modestly endowed (although there is nothing wrong with that), do I have something stuck in my teeth, what if I fall and embarrass myself at the shoot?  I go through all sorts of superfluous worry, but a lot of that goes away when I actually get on set and ready to go.  When we get started there is a hush that falls over everything and I am present in that space and time.  It is a pretty cool sensation.

Check out more of Austin Tacious below.

Interested in having your model profile featured on Underwear News Briefs?  Email me at kyle@underwearnewsbriefs.com