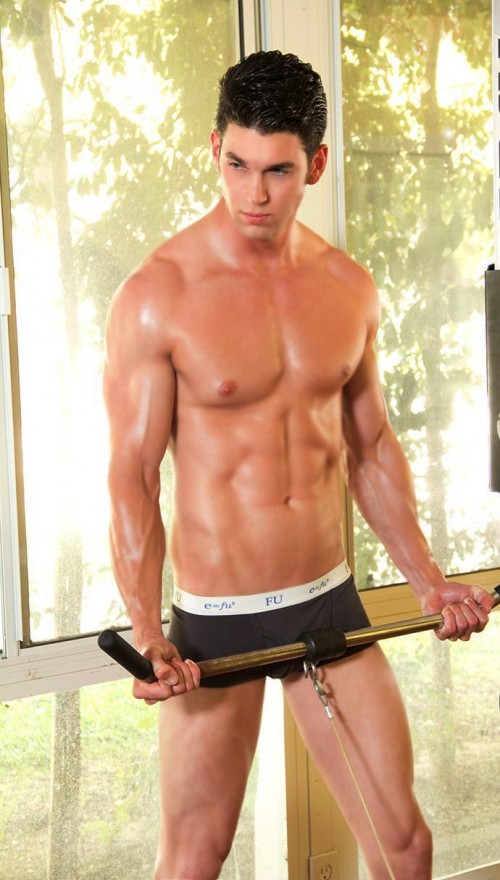 Today’s Brief Distraciton features Cody Sneed for FU e=fu8. We have profiled FU e=fu8 a few times. We hope you check them out at their site and also check out the Official Cody Sneed site. Photos taken by Tobin Alexander 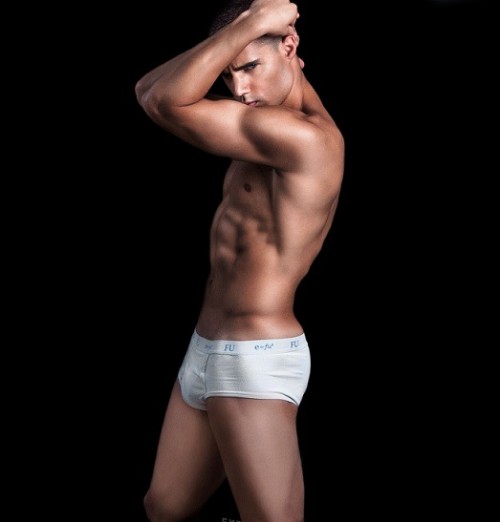 Recently WWD had an extensive article on the multi billion dollar, global men’s underwear industry. Men’s underwear has come a long way from when there was just not that many choices; & most were packed 3 to a box, purchased without much thought, time or attention. Men’s underwear was literally in the closet; worn for utilitarian purposes & nothing more. There was no fun in the search & purchase of men’s underwear, unlike women when they purchase shoes. Calvin Klein changed all that back in the 1980’s with his traffic stopping Time Square poster. 2(x)ist became the hot, must own, wear, seen & be seen in underwear in the 1990’s.

Today there are well over 100 brands that carry the designer’s name (Andrew Christian, Michael Kors, Tommy Hilfiger, Calvin Klein); & those that have some sort of cute eye catchy formula (2(x)ist, C-IN2, 4Skins, 2Wink, 3G); until I created FU e=fu8 Underwear. Currently mine is the only brand that features my name and an enigmatic formula.  With a name like FU, I had to do sexy well made underwear (it would be a crime against male sexuality if I didn’t), and e=fu8 is my exclusive, trademarked formula for The Pleasure Principle.  Life is short, maximize your pleasure principle. I hope guys who wear my FU e=fu8 Underwear & those who see it will be reminded to carpe diem, & make the most out of their precious time; to spend it pursuing things that bring & enhance their life’s pleasurable experiences.

Unlike 99% of the brands out on the market today, FU e=fu8 is made exclusively in Manhattan, NYC.  This is due to my love of New York being the fashion capital of the world; and wanting something to be created in Manhattan’s resurging and famous Garment District.  It is my second home & is getting a second reincarnation; much like the Meatpacking District in NYC. It all started here in NYC; but so far, there have been buyers from Canada, Boston, Philadelphia, Ohio, Illinois, Germany, Austrlia, Portugal, California & of couse New York City.

I wanted to produce and design high quality well made underwear that will give guys confidence & that extra bounce in their step. The fabric is ultra soft and has a nice stretch, so you feel supported. The finest materials were sourced to make this underwear collection; the fabric is the best available, a plush high thread count 95% cotton, 5% spandex, I went with this premium & more expensive cotton; b/c I found other brand name briefs on the market use a very thin cheese cloth/rag feeling cotton that loses its shape after a few washings. I refuse to cut corners & sacrifice quality. I wanted to design & create something that I would want to wear myself (and I do) & be proud to have my name on it (and I am). I carry my current FU e=fu8 Underwear collection around all the time; people are instantly captivated when they see, feel & touch it in person.  At a recent birthday party for a female friend, before the evening was over, I had orders for 7 pairs from the guys at the party, and in a recent FU e=fu8 Underwear 2 day photo shoot, the model instantly feel in love with the Pleasure X8 Cut once he had them on; and the makeup artist begged me for a complimentary pair. I hope guys have as much fun wearing FU e=fu8, as much as I enjoyed designing it for the image & style conscious 21st century men who are always on the go.  FU e=fu8 Underwear is the bold, daring, new men’s underwear line that could… and the saga continues with jock straps, tee shirts, swimsuits in the not too distant future.

In honor of spring & summer, complimentary S&H on order $45 & over, enter code: FUefu8 to reedeem at checkout, http:fuunderwear.com