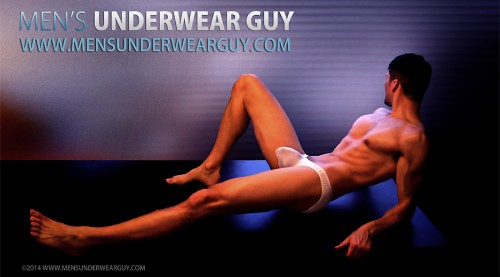 It was a pleasure to interview Men’s Underwear Guy. He was around before UNB and one of the people who inspired me to create UNB. He took a break and is now back and check out his site. He’s an UBER underwear fan!

You have been one of the oldest underwear blogs on the net, what made you start your blog?

The first iteration of my site launched around 2007 and it was driven by what I saw as a gap in the available information online about men’s underwear. I am always shopping for new underwear and I like to make informed decisions but unfortunately, at the time, there was very little first-hand, objective information being provided. I realized that due to my extensive history and experience of shopping and wearing so many different types of underwear I was in a unique situation where I could share a lot of information that was well-researched and analytical rather than superficial and full of marketing-speak. I have a background in web design and writing so I thought an online website would be a good way to combine my professional skills with a personal passion.

What started your underwear love?

I can’t say I know exactly when I become so intrigued with men’s underwear but I do remember growing up in the 80s as a teen and noticing cool styles in the newspaper shopping inserts for underwear that frequently caught my eye. I was always interested in the unique designs and styles that were different from the regular white briefs like Hanes or Fruit Of The Loom. Since it was the 80s you could actually find regular department store brands advertising some interesting styles like bikini briefs made from sports mesh fabric in bright colors. Those few glimpses of what men’s underwear could be beyond the standard every-day styles opened my eyes to the cool 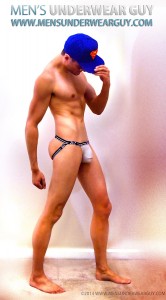 ideas that could be applied to men’s underwear fashion.

Who are your favorite brands and why?

I like many different brands of underwear but I gravitate towards the designers who work hard to innovate all the time by refreshing their designs, sourcing new exotic fabrics and who aren’t afraid to push boundaries. Some of my favorite brands/labels include Modus Vivendi, Gregg Homme, BodyAware, Undergear, California Muscle and N2N Bodywear. There’s always room for standard day-to-day basics in my wardrobe but when it comes to finding underwear that makes me enthused to buy, it’s usually an innovation in design, engineering or fabric. I like knowing the designer is continuously striving to find the next big thing and working hard to keep up with trends. Men’s underwear has evolved to be much more of a fashion statement than ever before and it’s clear when a designer or label is really passionate about making a statement rather than just trying to latch on to an industry in the hopes of quick profits.

What are your favor styles for daily wear?

As readers of my blog know, I divide underwear into a variety of categories so the term daily wear has a specific meaning to me. I think daily wear should be comfortable, durable and functional while still being reasonably fashionable. Within those criteria I’d say my favorite styles for daily wear or generally low rise briefs with an exposed waistband in cotton-spandex blends as well as micromodal mini-briefs. I like the feeling of structure and shaping that a brief can supply combined with modern styling using basic, strong masculine colors.

I can’t remember how I found you but your site was awesome you do amazing and in depth reviews, how did you come up with your criteria?

My reviews have evolved over many years and I keep expanding the criteria that I rate an underwear item against. I’m a very detailed-oriented person and I work to cover virtually every aspect possible that would help other people make informed purchasing decisions. Some of my most favorite underwear factors to focus on are size range, pouch fit and fabric stretch. I think those three criteria are some of the most critical to whether or not an underwear garment is going to fit and feel good when you wear it and thus be worth the investment. Almost more than any other clothing item, underwear is a very personal fit and yet up until relatively recently, men’s underwear was treated as a mostly generic fit and design exercise. Every guy is not only going to need a specific size for his overall body, he’s going to desire a unique fit requirement for his package as well. Women have had bra cup sizes for decades but that underlying concept still hasn’t been fully realized as a specification system or buying option for men. Until a truly universal system has been adopted by the men’s underwear industry, “fit fragmentation” is going to be a prevalent issue so providing detailed information that describes how each cut of each design works will continue to find an audience. There’s nothing worse than spending your hard-earned cash and finding out you can’t wear something which can’t be returned.

You took a break from the blog but came back did it energize you to make a better blog?

I think the key word you used is “blog” which, for myself at any rate, defines a specific kind of site that follows a fairly rigid template in both style and content. Previously I had been able to find ways to bend the blog platform I was using to varying degrees of success but ultimately I knew I would need to break away into something more open in the future. Due to a variety of reasons taking my old site offline made sense at the time -as tough as it was to do. In planning the relaunch of my site I knew it had to be bigger and broader than my old site to keep things interesting for myself and my readers. Starting fresh with a new visual design and code template that was free from a specific platform really has been a great experience and I’m very pleased to be able to continuously update and enhance my site now that the foundation is in place.

What does the future hold for you and your blog?

Underwear reviews will of course be an ongoing staple of my site, I think that’s where the most value is found for a lot of my audience. In order to keep things interesting for myself, however, I intend to continue to develop content that extends outward beyond the mechanics of underwear and more into society, culture and artistic expression. There are several ideas and opinions I’ve been throwing around in my head regarding certain cultural expectations, given norms and evolving attitudes that are either surfaced by or reflected through men’s underwear. I certainly have enough ideas to keep me busy working round the clock if I had the free time so almost anything is open for the future.

Where can our readers find you?

I’ve been having a lot of fun using Twitter and YouTube to a much greater extent than I did previously and it’s a fun way to connect and hear back from underwear fans around the world. I can be found on Twitter at: https://twitter.com/underwearguy and on YouTube: http://www.youtube.com/mensunderwearguy. For more traditional communication my email address is talk@mensunderwearguy.com