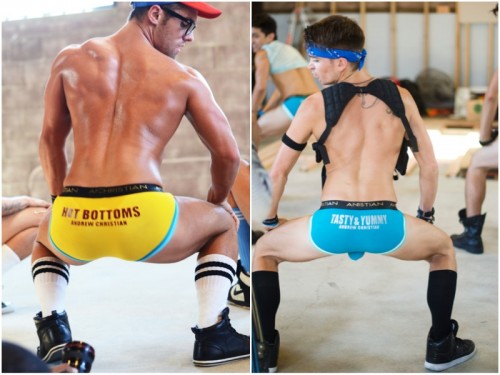 Andrew Christian is proud to announce the release of their newest video, “Twerk Off”, a celebration of one of the world’s most popular dance trends, as well as their newest “Trophy Boy” collection.

With the addition of the term into the Oxford English Dictionary, the dance trend of “twerking” has reached an unprecedented level of notoriety. In recent months, twerking (defined as ” thrusting hip movements and a low, squatting stance”) has taken the internet by storm, with both men and women the world over bending over and showcasing their skills. It later made its way into mainstream music, with pop stars’ attempting to rival these web videos with varying levels of success.

The boys of Andrew Christian have already developed a reputation for delivering some of the steamiest viral videos on the web. Their newest “Trophy Boy” collection is a new line of men’s underwear designed specifically for those with a larger-than-life endowment. Trophy Boy underwear does more than just support these massive manhoods, it showcases them for the world to see and appreciate.

Many of the Andrew Christian models, including popular faces like Jon Varak, Jeffrey Hawkins, Jonathan Meyers, and Parker Dailey, have been fans of twerking since the beginning. So when it came time to celebrate the Trophy Boy collection on video, it seemed only appropriate for twerking to be involved. Both the dance and the underwear are designed to showcase the guys’ more desirable assets, and “Twerk Off” celebrates that fact the way that only Andrew Christian can.

The video is available to watch NOW at AndrewChristian.com. In less than 24 hours, the video has already accumulated almost 30,000 hits. Fans of the video can shop the Trophy Boy collection in stores or online.