We had an opportunity to talk to Eric the Head Baskit Maker over at Baskit Undies. The talk was going to be on the extension on the Body Art line, but we talked about a lot more. We talked 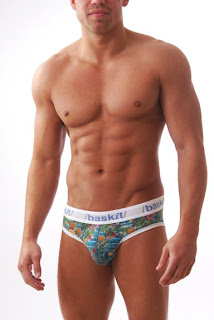 about the other lines, how he started at the company and much more.

The first thing we talked about was the extension of the Body Art line. The line, he said, originated when he was in London and noticed a guy at his gym who was covered from head to toe in tattoos. He would see the guy in the gym a lot and one day he asked the guy could they use his tattoos as the inspiration of the new line. The gentleman agreed and they took some pics and came out with the line. The original closely matched the guy’s tattoos with blackish/blue tint. The line turned out to be one of the best sellers. They then came out with the newer cyan based line. As you can see by the pictures here, the line is a little brighter and fun. And no matter what style of underwear you like, they make it in all. From boxer briefs, briefs to jocks, any style you would want to wear.

Some other updates include changes to the Action Cool line. The original mesh was one that may not have been comfortable to wear all day. After some research they re-launched the brand with 100% cotton mesh that became conducive to daily wear. 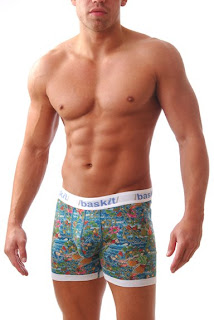 There are perfect for working out or someone who has a very active day. The Action cool line is available in Black, Bronze Green, Brown Stone, Riviera Blue, Vermillion Orange and White. Styling also vary just as much as the colors, you can get the various colors in the Boxer Brief, Sawed off trunk, bikini brief, low rise trunk and jock.

We asked Eric what his best seller has been. He told us it was the pink jockstrap they put out about a year ago. He didn’t expect it to be such a success. They were out for a short time and if you didn’t get one, don’t loose hope, they maybe back soon, but as of yet there are no plans to put them in production. Keep checking the Baskit site and we will let you know when and if it’s released.

They are a company that takes risks in their underwear as well. You may remember the Pin Up line called Beauties they had out earlier in the year. The pictures that used to grace WWII bombers of Pin Up models inspired them. They are a series of boxer briefs with different vintage pin ups on the leg. This is carried over in the Fall 2008 collects for the Beauties and Brawn lines. Both have vintage images on the underwear. Beauties carry over the pin up theme, while Brawn is vintage images of men.

One last thing about their underwear is the sizing. The sizing is based on European sizing. 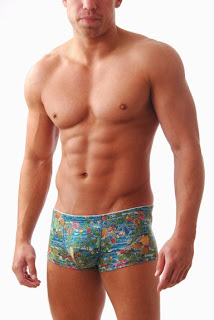 Which means that its a little smaller then true American sizing, but it should not make a major difference. But we would suggest if you’re right on the end of a size, for example, if you’re a 34 and the size is a 32-34, try the next size up. Which makes good sense for any brand you buy. You will be more comfortable.

The company’s lines seem to be always evolving into something fun to wear. They have items you can wear to express your personality to something simple to wear to the gym. For those of you who want something simple the Urban line is one that has a simple waistband and conservative colors. While if you want something to express your self the Body Art, Stripes and Beauties and Brawn lines, will alloy you to bring your personality to your underwear.

The last thing we talked about was how he ended up working in the underwear business. He said he was working for the UK government in London and decided he needed a change. And as fate would have it, through a friend, he met the two owners of Baskit at dinner one night. At that dinner the owners mentioned selling the company. After that conversation he negotiated with them for about six months till they sold the company to him.

Since taking the over, the company has been reinvigorated and new lines have come out. The company now has a distinct vision and direction under Eric. He said on his blog “Already, we’ve placed hundreds of orders nation-wide and will soon reappear in many of the stores which had carried Baskit in the past. I want the brand to be functional, but also fun and sexy, and most importantly, I want guys to get excited about buying and wearing the underwear.” We wish Baskit continued success and look forward to new lines from them soon as well!