I hope this review finds all of you guys doing well. I had the opportunity recently to sport the ever so trendy underwear from Ginch Gonch. I own their Red Bandana Jockstrap and LOVE IT! Therefore, I became very interested in reviewing a pair of their new briefs. Ginch Gonch provided a pair of the Spokey Pokey low-rise briefs for me to review. When I received them in the mail, my first thought was, “interesting”. 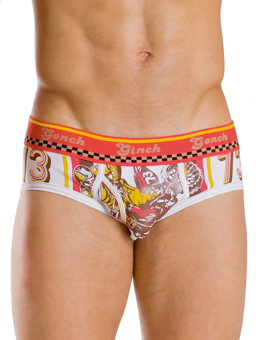 Ginch Gonch has a unique style that separates them from other underwear designers. It has developed underwear lines for both men and women. I feel that it has taken a classic look of underwear and given it a modern feel. I also feel that it does a great job of making underwear fun again. I think, above all else, the latter is the truest point I can make.

While reviewing the Spokey Pokey low-rise briefs from Ginch Gonch, I found them to be very satisfying. I will admit that at first, the name of the briefs threw me, but the design on them explained it all. The briefs are mainly white briefs with a classic look, but on them appears a design involving dirt bikes. This obviously lends to the name of the briefs. I found the briefs to fit pretty well. I reviewed a size large and feel that the fit wasn’t too bad, but for a guy like me, I am curious to know how the XL size would fit. As of any Ginch Gonch underwear, the material is high quality and soft. It is very comfortable for everyday wear and even for a trip to the gym. Being someone who has both a reasonably sized package as well as some decent “junk in the trunk”, I would say that the particular design doesn’t totally work well for my body type. I personally feel much more comfortable with underwear that has a more defined pouch that aids in placement and growth. I don’t know whether going up a size would solve this issue or not.

The look of the briefs is a classic but modern take on the typical briefs of the past. Along with my low-rise version, there is the classic brief version as well as trunks and a jock in this particular design. As I mentioned earlier, this particular pair, along with many others that Ginch Gonch sells, has a very fun and childlike theme. Whether they are trucks, motorcycles, or super heroes, Ginch Gonch is working hard to bring a sense of fun and playfulness back into the underwear world. It’s something we all had when we were much younger but were forced to grow out of too soon. 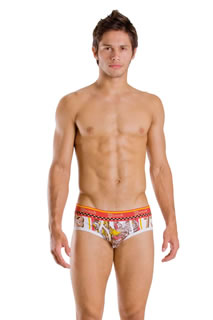 In conclusion, the Ginch Gonch Spokey Pokey briefs are a pretty good pair of low-rise briefs. I give them an overall rating of 4.2 on a scale of 5.

If you want to get into a pair of these very old-school, yet trendy, briefs check out the Ginch Gonch website at www.ginchgonch.com.

Ginch Gonch provided the briefs I have reviewed.