Here is part two of my experience at Magic! 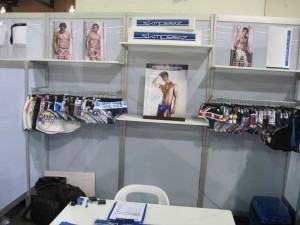 If you aren’t familiar with Skmpeez, well they are a great swimwear company out of Canada. Yes I said Canada! They have really broadened their line this year. They have a lot more pairs, which come in three styles. Which are skimpy, not so skimpy and board shorts. In the designs this year they have mixed and matched things you wouldn’t think would go together. I just have to say herringbone is one of the patterns, but you won’t believe how they used it. I will post a pic of this pair when I get it. These mixing two uncommon things into one is a theme that runs through their line. It will be out in, I believe April. They have a lot of potential and I hope we see a lot more of them. I really had fun hanging out with the Skmpeez boys at Magic. 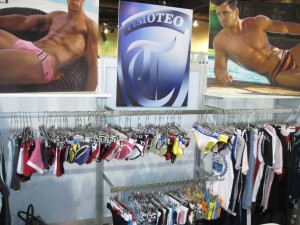 Timoteo has the Classic and Quake lines, but they are also coming out with a new line. The new line has a really awesome waistband, if you look real close in the picture, you will see it. It’s a sportier designed waistband; I really liked it and told Timoteo that when I looked it over. He said they had two designs for the band but this one by far out voted the other. Plus the images that they had in their booth were amazing. They had two pics, about 6 feet by 8 feet. I’m bummed because I thought I got a picture of them! Timoteo does amazing photography work and we’ll pass along new pictures when they are out! 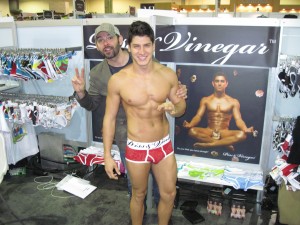 Beyond Big has a few lines there; Piss & Vinegar, Expose, Dick & Jane and they have a new one coming out as well.  Piss & Vinegar has already hit the American market and has made quite a splash. It has it’s I love, Jesus, Buddha, boys and girls. Expose is a brand from Columbia with a sporty design. We should see it in stores shortly. Dick and Jane and is popular with urban youth. It was founded in Russia but is headquartered in Vienna. You can find it in Eastern Europe, and now with the help of Beyond Big it will be in the States and Western Europe. They will be releasing more brands soon, and we will definitely keep you posted. If you’re not aware, Jason (in the picture) is the founder of Ginch Gonch and his partner, Brian Edgar is a former Tommy Hilfiger executive. I expect to see big things from them!

Jocko is a company we haven’t covered much on this site. It’s a brand I have seen in stores and online but we haven’t talked to before. So, I was really excited to get to talk to them. If you’re not familiar with them they do underwear, swimwear and workout/street wear. While I was in the booth, I had the chance to talk to Geovanny as well. He’s a dancer turned underwear designer. His undies were very cool and colorful. I have his number and will be calling him soon to get some pictures of his underwear and more information about him. 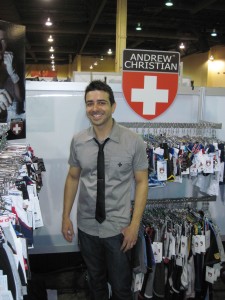 I got a chance to talk to Andrew himself at the show. I talked to him about how much all our readers love Andrew Christian. Which is true, every time we do a contest with Andrew Christian, everyone goes crazy! Which is a good thing. Andrew was showing some of the new designs. The one thing that will be coming out this month is Swimwear. They have some new Show-It and Almost naked swimwear, if it’s not out now it will be shortly. They have some really cool new undies, that will be announced shortly. Most of them will be out in June, but expect new styles, colors and some really fun ones! Just a hint some of their current lines will be taken to the next level!

C-IN2 looks like they are concentrating on some of there core designs. They are doing bringing back the original design of the Bamboo brief. Which is one of my all time favorite pairs. They are also doing some great work with color. They have redone a lot of their lines and I’m not sure the exact launch date. But it’s classic C-IN2 styling with some new colors. So if you are a fan of C-IN2 you will love the new lines. 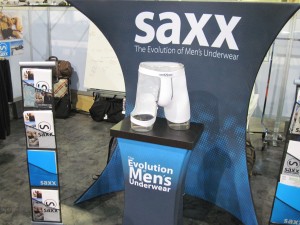 Saxx has come out with white before the show. Previously they had only black underwear. They told me at the show that this year they will be bringing out more colors. If you are active and looking for good undies, then I think you should try them out. They look funky but fit pretty well. They are the only company as well that I got a free pair from. It’s a pair of their Bamboo line. I haven’t worn them yet but I will let you know on Twitter and Facebook how they fit! They told me that they sponsored one of the Canadian teams for the Olympics. Look for more from them in a week or two!

This is part two and part three will be up tomorrow or Friday! I hope you enjoy this!