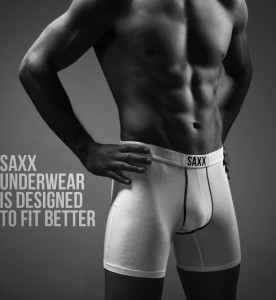 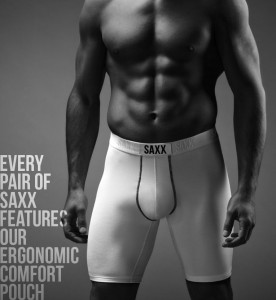 You may have seen the Saxx Underwear video we did with at Curve. We wanted to give you a bit more information about Saxx Underwear and what they have been up to this last year. This is part of the Curve/Magic follow up. I think Saxx is doing some great things and they are doing something different in the world of men’s underwear.

Your brand is growing, for those not familiar with your brand can you tell a little bit about Saxx?

Saxx was founded on a simple inspiration. Make men more comfortable by re-thinking and re-designing men’s underwear. Saxx founder Trent Kitsch came up with the idea for the underwear while on a fishing trip off the coast of Alaska. He was wearing a survival suit for three days and experienced what most men do, discomfort and irritation. He realized that there had to be a better way to design men’s underwear. In 2006 the first pair of Saxx underwear was introduced in a University cafeteria. Trent manufactured 200 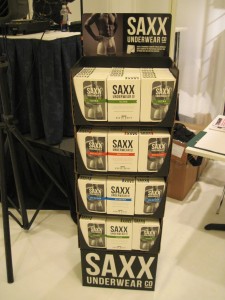 prototypes, which he sold in a matter of minutes to his classmates. The underwear featured integrated parallel mesh side panels, which eliminated contact between a man’s package and inner thigh. The product was an instant hit and introduced a new level of comfort to the men’s underwear market.

Saxx has gone from Saxx apparel to Saxx underwear why the change?

Through the rebranding process that began last year, we found that “Apparel” was just too broad of description for our brand. Saxx is based on underwear and the technology that was created for it. We wanted to make sure that our customers knew we did underwear and only underwear.

What has been the biggest obstacle in this process?

To be honest there hasn’t been that many obstacles in this process. We are a young brand, have only been in the US market for 6 months, and in Canada for 2 years. Customers that were aware of our brand before the name change really knew us as Saxx, not Saxx Apparel. The shift to Saxx Underwear has mostly gone unnoticed.

Anything surprised you (in a good way) while rebranding?

We knew that there would be a response to our new packaging and brand direction, but I don’t think that any of us would have guessed that it would be this positive. The quality of our product has always been there so it’s great to see that we now have the brand image to match.

I had the chance to talk to you at Curve and we did a video, what are some of the new items you have coming out?

For May of this year we have an number of new items coming out for Saxx. The first is the introduction of new colors in all of our fabric lines. That includes Utra, 24 -Seven and Pro Elite. We had been focusing on producing only Black and White until this point, these are still the main colors that men buy in underwear. We will continue to do Black and White but with the colors we now have reach into some new markets. I am personally really excited about having a variety of colors  and not just black in my own underwear drawer.

We will also be introducing a new line which we call Luxury. The fabric is a Modal/Cotton/Spandex blend. Modal is an extremely soft, light weight material.  Luxury  will be available in Black, Navy and White with Red waistband in both Boxer Brief and Trunks cuts.

Along with better fits, an increase size range, we now do XS all the way to XXL, new packaging and new in store POP we have a lot of exciting things happening at Saxx.

For more info about the brand visit our website at www.saxxunderwear.com and become a fan on Facebook, http://www.facebook.com/SaxxApparel.

We want to thank Saxx Underwear for taking the time to talk to us. I will be doing another review shortly. I received a pair at Curve and will write it up soon. So check them out or check out our previous review of Saxx Underwear!