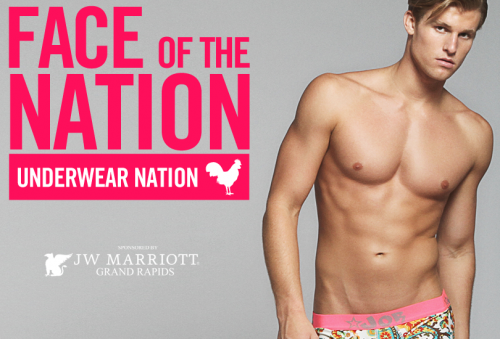 Any guy who thinks he has the face and body to be our next underwear model and is a US resident can enter right through the Facebook App.  We’re accepting submissions through Friday, March 29th at 11:59pm.  Voting is already up and running and will end on April 13th.   Underwear Nation will judge the submissions and men chosen as finalists will be posted to the app for voting.

We encourage guys to STILL ENTER the contest, there is plenty of time to make up votes in the 13 days after submissions close!  It’s still anyone’s game!  Models can push, promote, share and encourage their fans and friends to vote every day for them.  Voters can vote once every 24 hours and for as many models as they want.

The prize is a flight to Grand Rapids, Michigan.  Two nights at the JW Marriott, Grand Rapids (www.ilovethejw.com).  A photo shoot for the monthly feature on underwearnation.com and free undies.