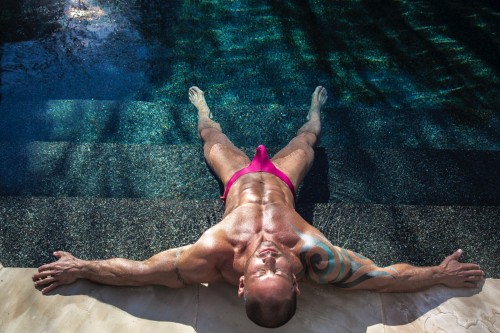 We have to say Scott Cullens is one of the hottest models on the Underwear/Swimwear scene. In all our dealings with Scott he’s as nice as he is hot. He’s just one of those really nice guys out there. But now you can own a piece of Scott. It’s not exactly what you think. I know many out there would love to buy his underwear right off him. He’s auctioning off some of his shoes.

If you follow Scott on any social media you know he’s a big time shoe guy. He’s got a massive collection of everything you can imagine. I’m quite jealous of some of his shoes. Here is exactly what he’s doing:

100% of all proceeds go directly to Soles4Souls. 1.2 billion people live on less than $1.25 per day. 400 million are children. Many don’t have access to one of life’s most basic necessities: a good pair of shoes. Soles4Souls is a global social enterprise committed to fighting poverty through the collection and distribution of shoes and clothing.

All of the shoes are from my personal collection. Some are never worn, some barely worn, and some are collector’s editions. ALL are cared for and look new. These shoes are merely an incentive to open your hearts and donate to help another human being live better than they do at this moment. Help a child with basic life necessities we take for granted.

Go to Ebay and bid it’s only one for a few more hours!