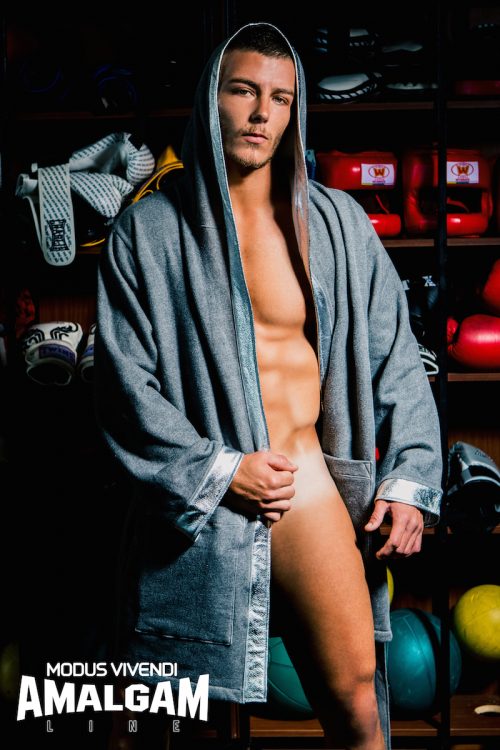 Continuing the launch of Modus Vivendi’s autumn/winter 2015/16 collection is the release of an outstanding, new, and unique line of men’s underwear and sportswear: Amalgam! Modus Vivendi has called this new line Amalgam, derived from the Greek malagma, meaning ‘soft’. Indeed, this line is made from a blend of top quality, ultra-soft knitted and woven fabrics that that will cosset your skin like never before. Briefs, boxers, tank tops and sweats, all in a subtle combination of grey tones but that’s not all! Modus Vivendi takes retro boxing gear and gives it a full fashion workout for this line, with glitzy silver fabrics reinventing classic designs and styles. Check out the ultra modern tank tops, robes and pants, all in shiny metallic silver combined with cool greys.
The campaign of the Amalgam line was photographed in Club Realbox gym in Tenerife, by talented Adrian C. Martin. The model is Christopher Garcia, current European champion of Brazilian Jiu Jitsu. The shots are fresh and strong, combining action with sleek style and the right amount of sexy, a great interpretation of this outstanding new line. The arousing backstage video was filmed by Sergio Del Pino.