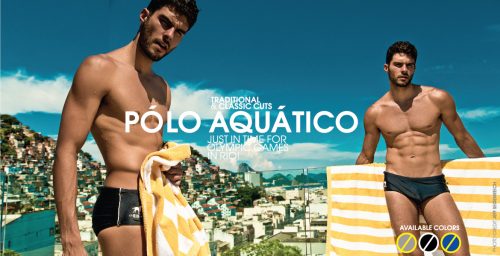 The Rio games are in full swing. Swimmers are in the pool making world records and winning gold medals. Gymnasts are vaulting and somersaulting. And insert many more sports for the summer. Now that all eyes are on Rio, will all eyes be on the swimwear? Known for their Sunga swimwear for men, will we see it take the spotlight and go mainstream?

Swimmers now wear Jammers. Long spandex short like suits. Divers are the only one still sporting the swim brief. But for the most part of the games they are a long ago memory of days past. However, the people in Brazil are proudly sporting their Sungas. The Wall Street Journal made a long post on it today. “Locals are showing off their Sungas on Rio’s Beaches.” I would say read it because swimwear made mainstream press.

However, that said It feels more like a “Oh look at them” piece in the WSJ. The mainstream press in the US always makes underwear and swimwear more of a butt of the joke  rather than actually talking about the history and why Brazilians wear them. This short Paragraph sticks out:

The men’s swim brief—also known as the man-kini, banana hammock or marble bag—is rarely used in the U.S. outside competitive swimming circuits, as its predominant nickname in English, the speedo, suggests. But in Brazil, the so-called sunga is a favorite for male beachgoers of all sizes, shapes and ages. – Wall Street Journal

This detracts from the advice they gave about who should wear what color of Sunga. Which is great advice, but gets lost after talking about how a guy used sunscreen behind NBC’s on-air coverage one day. I, also, think they have the definition wrong as well. Our friends at CARIOCA have this definition on their site ”

def. SUNGA (SOONG­A):
Is the Brazilian word for men’s swimwear. Sungas are made from heavier nylon and are cut to form a nearly horizontal band across the body.

Unlike swim briefs or banana hammocks, they are nylon with no pouch design. The slough design will create a pouch for guys. Plus, they are typically bigger than most swim briefs. Looking at the CARIOCA swimwear site the sunga is 15 cm. I personally would have no problem wearing one on the beach in Brazil or in the US.
It’s time we have press that looks at men’s swimwear and underwear with open eyes.Let’s look into the history and why Brazilians are wearing them. Instead of gawking at people who do wear them as some sort of eyesore or freaky guy. I’ll get off my soapbox now. It just kinda pissed me off big time after reading this article.