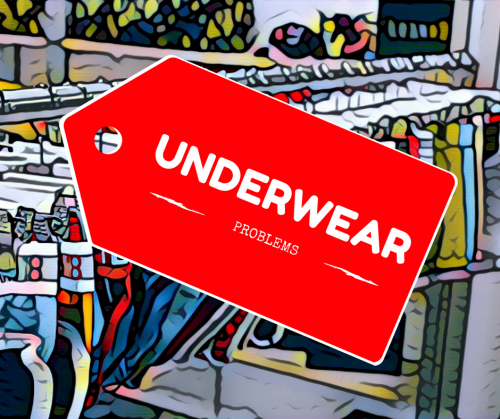 I have a problem:

I have a problem shopping online for underwear, which perhaps puts me in the bottom 5% of underwear shoppers. I am very lucky to be living in a city that has a good little underwear store and I’m close enough to a (paradoxically) smaller big city with a bigger underwear store. So yes, I am spoiled and I know it. Actually, Seattle has two places that sell top quality brands and styles that one would not find in a Macy’s (if yours has not closed) or a Nordstroms.

So, given my ability to shop in person perhaps it is not too surprising that I have an issue shopping online. However, it persists. This week I visited both the bigger store in Portland (Under U 4 Men) and their smaller store in Seattle. The two combined have been getting a generous percentage of my paychecks for almost a decade now. The issue that I ran into: I couldn’t find any thongs.

Yes, thongs. They are not my everyday style and I only get in “moods” to wear them a few times a month but none the less, when I want one, I want one. I have some great Thongs from N2N, Cockstocks, even Male Power but I like variety and I wanted more of them. And neither store had very many and the selections were fairly uninspiring. And I get it, they aren’t the hottest selling men’s style so it makes sense not to spend much floor space or inventory on em.

Thus, to online, I turned. But where? Often when I shop online I go to specific brand’s websites like N2N, Baskit, Timoteo, Garcon Model, etc. and hit up their SALES sections. But even after bouncing from a few websites I couldn’t get anything to speak to me. So, I turned to the mega sites, the ones that have EVERYTHING for discounts. And there I had another issue, TOO MUCH! I was paralyzed by choice.

Even just when doing a search on Amazon there were issues. Either I couldn’t get a good feel for the pair and thus couldn’t pull the trigger OR the seller seemed less than quality. I like quality underwear and I want them to last so when someone is selling a pair for $4.25 I’m basically counting that as a “Two wear pair” and I don’t want that.

Indeed, I have a problem. I tweeted about this a couple times (@underloverwear) and got some helpful thoughts from people (Thanks, @underweardude!) but still, I haven’t been able to order anything. I want that instore experience, I want to see and be spoken to by a pair. And therefore, it is really hard for me to shop online for underwear.

I imagine I will eventually either take a chance and buy something online or just stumble upon something that really does grab my attention online but until that day I’m going to enjoy being spoiled by my stores and hope that a pair finds me.

Do you have a fool proof site that you love? Let us know in the comments!