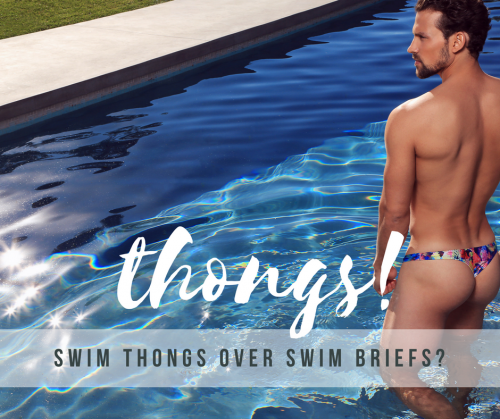 We have had our swim brief challenge for a few years. It’s been a lot of fun to do, get guys to step out of their comfort zone and wear what you want to wear. Many of you have taken this challenge, however, there are a whole group of guys skipping the brief and moving to the swim thong. This is a big jump from swim shorts to being suns out, buns out!

I have worn both of these styles. In my 20’s I regularly rocked the swim brief. To me, it was summer attire that you had to have a few briefs ready at all times. You never know when you are going to have access to a pool or be invited to a last minute pool party in the summer. There were a few times on the beach when I was the only guy in swim briefs. I paid no attention to others, it was a natural thing to wear to me. Shorts in water drove me crazy and were bulky. I thought I looked good in them so why not rock it.

There were only a few times I wore a swim thong. Most of the times it was at a private pool with a few others there. I was never comfortable in them in public. I say this because I never had the junk in the trunk. Not like a lot of guys you see on Twitter. But enough about me. In the last two years, we have more guys wanting to skip the briefs and wear thongs on the beach.

The most interesting part is this movement has been fueled by straight guys. Our own UNB Ryan, Shawn, and JayinCA are leading this revolution in men’s swimwear. They are wearing them in public and with no shame. Ryan wore them to the pool at the Flamingo. While doing it he had very little negativity. Shawn, as we posted earlier this week, wears them to the beach and makes it a perfectly normal thing. Jay, has started posting his adventures on Instagram to show more guys they should rock a thong.

To me, I would have never thought of skipping the brief and going straight to the thong. Many of you are having this internal conversation. You want to wear what you want, where you want, when you want to wear it! We will have Ryan and Shawn write more about the do’s and don’ts of wearing thongs in public. Stay tuned to get more encouragement to wear swim thongs