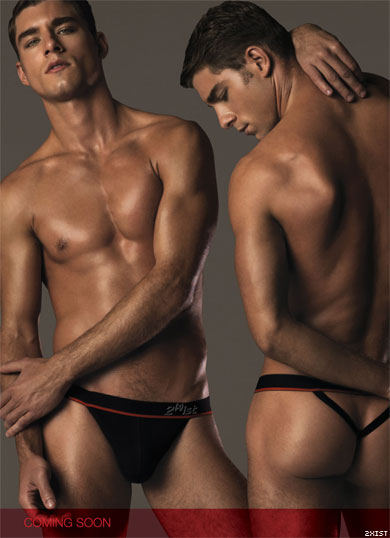 First off I want to thank Chat H. in the Facebook page for posting this. This is an ad that 2(x)ist wanted to run in various magazines. They included Details and Men’s Health. But they two magazines rejected the ad for being too racy. How ever the ad has run in the June/July of Out Magazine.

This brings me to something that has been going through my mind. Why is it men’s underwear ads are a lot more conservative then women’s. There is a TV Commercial about bra and how it fits plus sized women, Victoria Secret models wearing thongs and the list goes on. While the world of men’s underwear advertising is basically non existent in the main stream media. The only place I have seen magazine ads have been in the gay publications, Out, Advocate, and Instinct.

This has not always been the case thought, back in the 80’s, Baseball Hall of Fame player, Jim Palmer often graced the pages of People, Time and others in his bikini briefs. Let’s hope we get some mainstream media exposure for the brands we cover!

What do you think? Do you think there is a double standard when it comes to mens’ underwear ads?  (I hope this makes since, still sick but trying to be coherent )