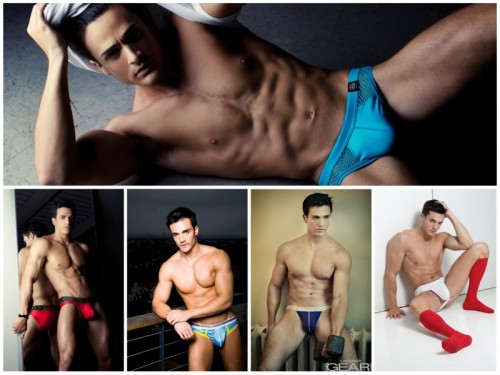 What motivated you to get into Modeling? What was your big break in the world of underwear modeling?
As a child I used to see all the billboard ads and Abercrombie posters and think about how cool of a job that must be. And I wished I was strong and athletic like those models were. So I started working out and building up my physique, and I was lucky enough to be discovered one day at age 17.

My big break was when I worked with photographer Bill Terry. He pushed me to take photos that I could use to market myself on various social and networking sites. My career wouldn’t be where it is without his guidance.

What have been some of your favorite shots you have done?
I’ve really enjoyed the magazine cover photo shoots I’ve been lucky enough to do. Specifically, DNA Magazine and Jocks Daily were a lot of fun with some really great shots. One of my favorite parts of my career in the modeling and fitness worlds is the fan base that I’ve gained. Hearing someone say that I’ve inspired them in some way never gets old, and shoots such as the DNA Magazine and Jocks Daily allowed me to substantially build my fan base and inspire more people.

You were named our readers favorite model in our unscientific poll. It was a lot of fun to do this, what made campaign to win the title?
The other models that were nominated in this contest are equally talented and equally deserving, so it was an honor to be mentioned among them. My publicist told me that it woud be a great opportunity to ask my friends/fans for support by reaching out on my social networks, and my fans pulled through by voting countless times. I have more than 120,000 Facebook fans, which is unbelievable. They’re the reason I won the Favorite Underwear Model title and I’m veyr grateful for all their support.

The brands you have worked for is the who’s who of the underwear world but is there any brands you want to work with?
I’d love to work with Calvin Klein and Levi’s. They are both iconic, legendary brands that have a massive following and produce excellent men’s clothing. I view Calvin Klein as the “attainable” runway fashion that you can buy and wear on the street, and Levi’s as the “everyday man” or the “man’s man” line that is timeless.

What do you have planned for the future?
I’m blessed that my modeling career is moving at a fast pace currently, and I’d love to keep that momentum. Additionally, I’d like to use my knowledge in fitness and nutrition (as a personal trainer) to gain more exposure as a fitness expert. Inspiring others to be healthy is one of my greatest passions, and I’d like to start doing that as much as I can. I plan to use my YouTube channel a lot more moving forward. I’d like to build up my “subscribers” and produce more fitness videos (and some underwear modeling videos as well). My fans have repeatedly asked me to make more YouTube videos and provide more fitness advice, so I’m excited to deliver that soon!