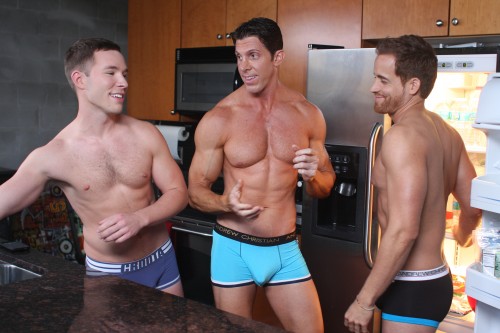 Leading gay film producer and distributor Guest House Films today announced the start of production on its seventh feature film – a gay murder mystery with the working title of Out to Kill.  The film will be written and directed by Rob Williams, and produced by Williams and Rodney Johnson.

Out To Kill is an intricate and witty “whodunit” murder mystery centered around a group of gay men living in a Florida loft complex. When one of their own is found dead in the building’s central courtyard, his neighbors enlist the help of Jim Noble, the resident private eye, to track down the killer. With its surprise ending and tropical location, the film offers a sexy, gay twist to the traditional murder mystery.

Principal photography has begun in Tampa, Florida — a departure from the company’s previous films, which were all shot around Southern California in locations that included Los Angeles, Big Bear and Palm Springs.

“The people of Tampa and St. Petersburg have always been extremely supportive of our films, and have often offered to help if we ever decided to shoot a film in the area,” said Williams. “So I returned to Florida earlier this year, found some great locations, and then wrote the script with Tampa in mind.”

“Rob and I both share insatiable appetites for anything within the mystery genre, so it’s unbelievably exciting to make one of our very own,” said Johnson. “The script is great, and I can’t wait to see what Rob does as a director with Out To Kill.”

Out To Kill will be the seventh gay-themed feature film from production company Guest House Films, writer/director Rob Williams and producer Rodney Johnson.  The company’s previous films have included hits like The Men Next Door, Make The Yuletide Gay, and Role/Play.  The film also will expand the company’s distribution catalogue, following the release of Role/Play and The Men Next Door, the short film compilations Black Briefs and Blue Briefs, and the Australian documentary The Doctor’s Wife.
The three actors, wearing Croota and Andrew Christian, are Lee Williams, Christopher John Cutillo, and Nicolas Burgos (from L to R).

Some information on Croota’s “Tennis Fever” range of underwear, featured in this still.

“Inspired by the Croota in-house design team’s love for tennis, the lo-rise hipster trunk comes in two versatile color variations, Sky Blue and Blue Indigo, and also features three different embroidery colors on the lower back. The numbers “00” are in a bold-faced white font on the top right of the rear to symbolize the starting score of a tennis match. It’s the perfect brief for guys on or off the court.

“Tennis Fever” is made of 95% cotton and 5% spandex, and retails for $18.90 USD.  For more information about Croota Underwear or to purchase a pair of “Tennis Fever” lo-rise trunks, please visit www.croota.com.”