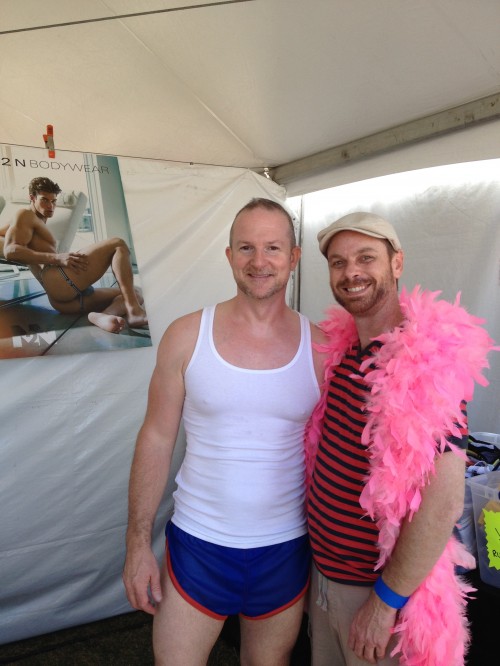 Well it’s that time of year, Gay Pride in almost every major city in the U.S.A. And also a great chance to see new underwear vendors and suppliers and the opportunity to get some great deals on underwear.

My first Pride of the year was the Long Beach Gay pride festival in Long Beach, California. The highlight of my day was going to the N2N booth and getting some great underwear, loungewear, singlets and running pants for amazing deals. As I was shopping I turned and there was Andrew, the owner, smiling and talking to people and being just an awesome guy.

I always enjoy meeting underwear designers and Andrew (N2N Bodywear) is one of the sweetest. He gives great hugs, (I’m a hugger) and will always make time to visit with people.

Also at Long Beach pride was Go Softwear. The people working the booth were super friendly and a lot of fun to talk to. They hade a huge selection at great prices. I stocked up on some of my favorite briefs while I was there.

Next was West Hollywood’s gay pride. I always love to learn about new companies and a new one to me was Interview. They have fun and sexy briefs and trunks and the prices were great. I of course chatted with them about underwear and found them to be informative and very friendly.

I am not sure what other prides I will attend but you can bet I will be looking for the underwear.

So UNB readers, what prides are you going to? What underwear vendors go to prides in your city. Reply and let us know who will be or was at your pride.

P.S. Gay pride isn’t just for gay people, a lot of straight people go for the fun that is Pride.