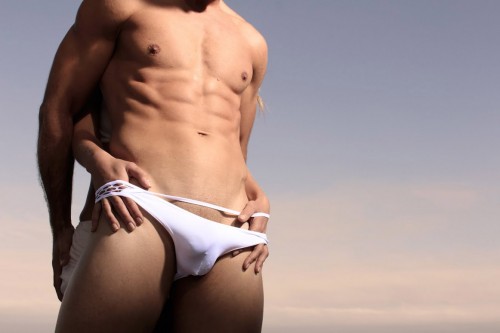 Growing up in a pretty conservative home made it difficult for me to go after my underwear desires.  I remember doing my own laundry so my mom wouldn’t find out. Hiding in the corner of the locker room to change after gym class. Even sometimes wearing boxers over my bikini briefs so not to give away my passions.  Looking back on that, I feel totally silly.  A quick analysis of the situation reveals that I let other people’s ideas of normal affect my choices of comfort.  This limited my ability to feel sexy and forced my underwear habits into the closet.

The very first encounter I had with anything other than plain old briefs (granted, I did have a splash of color and even stripes in my Fruit of the Looms) happened when I was twelve years old.  A person that I looked up to and admired was a huge underwear fanatic.  His name was Dan.  Dan was straight, athletic, had a gorgeous fiancé and wore the skimpiest, sexiest, strappiest, and slinkiest underwear on the market.  It was the early 1990s and underwear seemed to be anything but normal for men.  After all, this was the era where professional athletes openly wore bikini briefs that were sometimes see through, too tight for the boys to enjoy, and downright edgy.

People who exhibit influence over others are leaders in the truest definition.  I don’t think we realize how much power of persuasion these individuals have on everyday choices—including underwear selection.  Dan opened my world to the opportunity to be an undie fan. And the plethora of choices that plaque my shopping experience today. I’m appreciative to this gentleman and have had a couple of conversations about underwear with him later on in adulthood.  He still wears sexy briefs!

Seeing that Dan, one of the coolest guys I knew at the time. I paid a whole lot of attention to his first layer of clothing. I decided that I was going to toss the tightie whities to the curb and opt for the best choice in my rural community—Hanes bikini briefs from Wal-Mart.  This was 3 years later when I was around 15.  I rounded up a very close friend who could drive to take me to the store. I’d saved the $7 necessary to buy a three pack and had previously laid my eyes on a combo that included a hot pink, black, and blue in a fairly high cut brief.  My friend was there for the transaction and immediately started in on how stupid it was that I was buying underwear.  He just didn’t get it.  No matter how much I looked up to Dan and his choice of undies, voices of dissension played a huge role in my decision to hide my underwear fascination.  This led me to perceive that something was wrong with me.

Perception is reality.  We live in a society that places high regard on what others think.  We teach our children in school to worry worry worry about groups of other children and how to fit in.  This plays well into the hands of underwear fanatics both gay and straight.  I’ve wondered many times what people would think if I were to have an emergency and the paramedic had to cut my pants off only to reveal my bikini briefs.  We’d rather wear no underwear at all than to be caught in something that might not fit a proper perception.  For far too long I’ve let others opinions and ideas about men’s underwear keep me from feeling my best and being comfortable in my favorite undies.  I’d like to re-phrase the question.  Who SHOULD be the biggest influence on your underwear?  Unequivocally, YOU! Be who you are. Enjoy your own style.  Pull on that thong with confidence.  Strut your bikini briefs in the gym locker room.  Simply be YOU!

I want to thank Dan for being the biggest influence on my underwear in the past.

However, the truth is that my underwear is my business and my ability to feel great is my choice. I am the biggest influence on my underwear and letting other’s opinions sway that is totally shallow.  I’m thankful for my wife who encourages me to be who I am unashamedly.  I am also thankful for my Underwear News Briefs family that encourages expression in the purest of ways.  For all of the guys out there who hid their inner undie desire, let’s stand up for our briefs!

Salvatore is an Assistant Editor for UNB. He's a normal guy that's married with kids and loves everything underwear. Communicate with him on Twitter: @manatomicallyme

5 Best Places to Thong for the first time