Well I know it’s about time I talk about undies. I am going to share a secret with you that I found out this past week. There are several sites with clearance underwear sections. I mean great undies and good brand names for next to nothing. 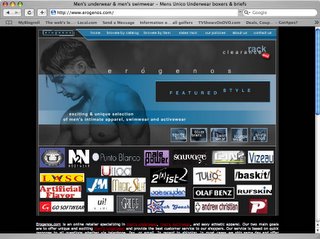 The first company is Erogenos. Its one based here in Atlanta area. I have yet to order anything from them. I tired the other wee but have had credit card drama. I’ve been living all them so need I say more? Well they had Unico and a baskit jock on clearance. And heck they have a lot on clearance. About half off what they usually have it for. I have found them a while back off the 2xist web site, they are listed as a seller near by me. I have seen them on for a two years and even emailed them about a job a while back, hey, didn’t hurt asking, they weren’t hiring but you never now.

The one thing I really like about Erogenos is that they have some really unique undies and swimwear. An example of that is Rufskin from Brazil, wow, some of it is really cool. They use net, mesh and all sorts of stuff. Check it out on their site. Another great find is Tulio, they do swim wear and not just bikinis but square cuts and board shorts. They are really cool. I wish most gay boys wore speedos still but a lot don’t’, but this brand shows there is a lot of styles that can be sexy when done right. So don’t just shop for the clearance stuff but the good stuff too!

The next place is N2N Bodywear. They have a great clearance section. They have 10 and 15 buck sections. But with their stuff you have to have the body to back it up. I hear from a buddy, they rock. They are one of the best suits you can get. I haven’t tried them yet but then again I’m not in the best shape. They also have undies too and I will try them out soon I hope.

This is just a quick post about gear and I hope I hear from you about what gear you like and where you shop. I want to do a “Where to shop for undies on the net” post soon