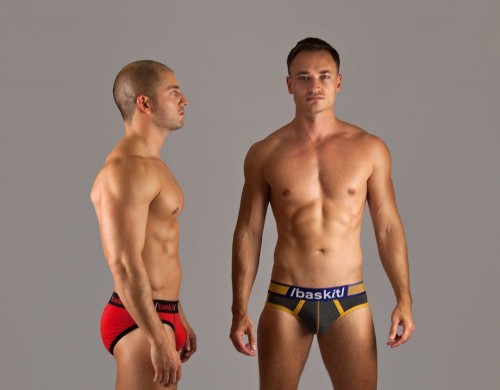 A common theme among the array of topics I have written about centers around the notion that too often, men pay far too little attention to the piece of clothing that stays on them the longest in any given day. Whether it is because we are afraid of change, or how a certain cut of underwear is portrayed in society. Even if we are just too busy to care enough to stop and think about our underwear, men far too often take the route of apathy, rather than getting out of their Old Navy printed boxer shorts.

It’s 2012 and that means it’s time to grow up and grow out of the sophomoric underwear you have in your top drawer. You’re a man aren’t you? You’ve got anatomy that needs support without being crushed, and thus should never be hanging freely in boxer shorts that are-when you really pause to think about them, almost pointless. You’ve got options, not only in terms of the underwear available to you, but in the places you have to shop for it. In case you have reservations or are still in denial, I’ve laid out a few things you should think about as you begin to re-think the most important pair of clothing you wear every day.

Leave The Reservations At The Door

If you are wearing boxers and are tired of how they fit and bunch up in your jeans, you may have to think about wearing briefs. Yes, there are some “stigmas” surrounding briefs, but get over them. Few people see you in your underwear, and your underwear is about you and no one else (well unless you want it to be).

This is very important. If you wear run-of-the-mill cotton boxers you probably have a couple of common problems. The first would be “bunching” and the need to “tuck them down” the leg of your pants. Second, “peek through” can be a problem for some men (it was me) which always requires quick, and a not-so-subtle “adjustment.” Finally by the end of the day, the legs of your boxer shorts are down on the front of your legs, but have been wedged up your crack in the back.

If you have evolved to boxer-briefs or back to briefs, but not from “value brands” your most common problem is likely “ride-up” (boxer briefs) and general cotton stretching throughout daily wear (both). Additionally the flat front (both) doesn’t actually “support” you, it “presses” your package closer to your body, but in order to get this fake support, you have to size down, likely meaning the waistband is too small, and if you buy the right size for your front, the back is incredibly saggy, it’s a vicious cycle.

You are a man, and between your legs lay the key to future generations in your name. You should stop denying that like any of your other friends your “boys” need support. Guess what? If you wear boxers they are getting none, and if you wear value-brand briefs or boxer briefs, they are getting cramped, not supported.

It’s 2012, and for nearly a decade designers of quality men’s underwear have figured out that underwear made for men, have the qualities that support your boys, without crushing them, and making you uncomfortable and self-conscious at the same time. And ignore the b.s. about “tight underwear” affecting fertility, in two months I become a father, and I have been wearing briefs for three years straight. Guess what? Tight underwear probably does increase the likelihood of temporary infertility, you know why? Because it is tight! And underwear should never be tight.

Think About Your Body & Style Before You Shop

Are you tall, short, average? Are you heavier set, athletically built, or skinny? Are you well endowed, average, or small? (I will be back with an “Underwear Guide” that will direct you to the appropriate styles/fits/brands based on all the answers to those questions in a post still to come).

How about your style? Are you a t-shirt and jeans guy for the most part? Do you wear a suit to work, but wear sweats when you get home? Are you a bit of both, but also clean up well? Are you what some might say “fashion forward” (in everything else but your underwear-obviously)?

You are finally leaving the “Land of Terribly Ill-Fitting Underwear” and I don’t want you to look back. But after you’ve agreed to give your boys the support they deserve, and answered some of the questions about yourself, you may not want to jump into the deep end with a pair of pink bikini briefs.

If you are a boxer or boxer brief wearer that is still “iffy” about trying briefs, I understand. I was you at one point-you should buy 3-4 pairs of Trunks-the perfected version of the boxer brief. Make sure they have a pouch with either a built in contoured shape, or a pouch that “gives” to your boys once you get them on. If you are feeling adventurous, play with colors, but there are plenty of trunks out there in your typical standby colors.

If you are a brief guy already, you may also want to try some trunks. You have a bit of a leg up on those guys who are coming to the game from “Boxerland.” Just about every designer brief made today features the type of pouch I have described above.

I know that shopping for men’s underwear, especially designer underwear can be a challenge in stores. Thankfully, there are dozens of websites that not only have dozens of brands and styles to choose from, almost all of them (the best ones) offer free shipping. And always shop the “Sale” section. Typically, these sites don’t like having to do clearance, so as the next season’s undies come in, they put last season’s underwear on sale. I try to never pay full price for underwear.

Never submit a payment for a pair that has not been reviewed. Go to buzzillions.com and you can search for reviews on just about any pair you might be thinking about buying. Underwear reviews because by the product’s nature, they have to be honest. And if you’ve thought about your body and style, then you’ll be able to place yourself in the underwear or not, based on the reviews you read.

If you’ve made the decision to update your underwear drawer you need to understand that you are experiencing something of a re-birth. In order to get on a level playing field with the “experts” like the contributors to this website, you will need to crawl before you walk.

Start with a few pairs of different brands in a cut you like. Think about what you like and don’t like about each pair, so when you purchase your next three pairs, you can try to find underwear that gives you only what you like and little of what you don’t. Two or three purchases later, you have enough underwear for two weeks worth of wear, and about half will be close to perfect for you, and the other half will still be so much better than the crap you used to wear.

Just don’t blame me if your refusal to settle sparks a bit of an addiction.