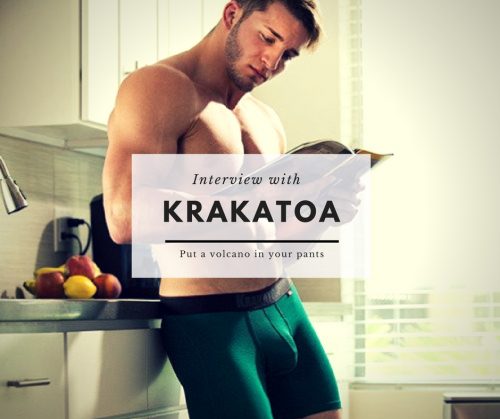 There is a new brand on the scene. We discovered in of all places, Instagram. They did a promoted post and I had to find out more about the brand. I shared it with Salvatore and we were both intrigued. We reached out and found there is a really cool brand with a great story. Salvatore and got the chance to interview the guys at Krakatoa Underwear.

I got the chance to talk a bit through email with Krakatoa and their spirit and enthusiasm shows through. They embody the spirit of the industry. They maybe new comers to the world of underwear.  But they came to make an awesome brand.

Tim: The first question I have to ask when did you guys consider making an underwear line? You said your background was in video games, it doesn’t seem like a likely progression.

Alex: After a game studio I was working on in San Francisco was closed by the VCs that were funding it. I had some time to think what I wanted to do when I grew up. At 50 years old, with almost 30 of those dedicated to computer graphics and video games. I was ready for a change.

One afternoon, after I decided that it was time for some of the scary passion-killer undies I had in my drawers to go to underwear heaven. I got caught staring at an endless wall of black and white pictures of guys in underwear at a large box store. But I couldn’t see anything that was worth my consideration. There was I, facing hundreds of pairs of underwear and nothing was catching my attention. Nothing looked different, new or revolutionary. They were all “familiar” and safe. And the same as they have always been.And I thought, there must be a market for a brand that would take some risks and create underwear for men. That would tweak the existing ideas. Make a cool garment that is dedicated to be the most comfortable underwear possible. And after talking with a lot of guys, listen to their grievances and needs. We found out there is a market

And I thought, there must be a market for a brand that would take some risks and create underwear for men. That would tweak the existing ideas. Make a cool garment that is dedicated to be the most comfortable underwear possible. And after talking with a lot of guys, listen to their grievances and needs. We found out there is a market of underserved guys.

Salvatore: When I look at your products, two words come to mind: sexy and masculine. What are your thoughts about how your undies add this combination to the industry?

Alex: When we designed Krakatoa, we decided that it should be a bit of a wildcard. It should look good and be super comfortable, no matter age or sexual orientation. It’s an underwear for us, guys. All of us. The only thing we would not compromise was comfort. The colors took a while to be designed as well.  We wanted the first 5 colors to be the most popular colors of underwear for men. But we wanted a specific hue of each one. To make them classy and distinguished, rather than flashy or attention grabbing. Even the Krakatoa name on the waistband is off-color and with just a single instance in front. To be discreet but remind you that you are using a premium product. As for being sexy. We had to straddle a fine line. We wanted guys to like it. But wanted women like them too. From some of the reviews of our clients. The satisfaction has been through the roof. Several commented on their significant others loving the look and feel of their family jewels in a Krakatoa. 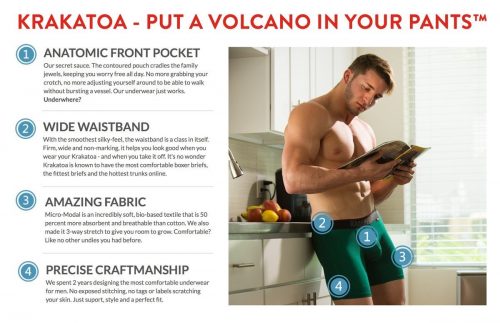 Tim: You guys created an anatomical pouch. Why was it so important to you to create your pouch? What has been the feedback on the pouch?

Alex:  The feedback has been overwhelmingly positive, to tell you the truth. After I used a couple pairs with a front pouch. I knew I could never wear flat-fronted underwear ever again – and Krakatoa was going to have one. But their designs left much to be desired. Some were just made to make your package look bigger, others just display it without much support. We tested several different designs for the pouch.  We settled on a supportive but spacious shape, that is not too big or prominent. The U-shaped, covered soft stitching around the pouch was engineered not to prop your junk up. Rather to cradle it comfortably without letting a testicle slip to the thighs. We bought dozens and dozens of undies from all over the world to test for the best pouches and cuts. Ours is so far the most comfortable I’ve ever used.

Salvatore: I consider myself the sites pouch snob. So naturally I’m drawn to anatomical pouches. I grew tired of being bound and twisted down there and made the switch. Do you have a personal story that you can share with our readers that led to such a provocative pouch?

Alex: For sure. I receive frequent messages from users, telling me that Krakatoa has literally changed their lives. I was taken aback at first, but there were so many, that I finally saw there was something special going on. One user told me his life was made 50% better instantly since he bought Krakatoa boxer briefs. Because for being overweight, his legs would chafe terribly when walking. Causing his undies would bunch up. But now he had no chaffing and loves how breathable they are, without crawling up his legs. Another said he could never imagine such comfortable underwear existed. He even bought some extra pairs to give to visiting friends, as he wanted them to experience it. All in all, amazing stories.  Every day I hear something new about Krakatoa that makes me realize we still have a lot of

Tim; Your wife questioned the pouch design when you went to post it. What did she have to say about it?

Alex:  When my wife first saw the product pictures I took of Krakatoa on a mannequin. She said “The pouch looks too weird to put on the website”, to what I replied “but that’s our product”. It was there I saw that I would have a steep wall to climb in regards to the look. If we were to make a super comfortable underwear. Some aesthetic compromises were going to happen. And made me understand why some brands look so good in pictures but are horrible to wear.

Tim: What styles are you currently offering and why did you select them?

Alex: We decided to start tinkering with the three more common modern undies: briefs, trunks and boxer briefs. We skipped regular buttoned boxers because we don’t find them comfortable. We believe support and package separation from the thighs is key to a good experience.

We plan to offer different designs in the future. This is the Classic collection. That we will keep offering along new products that are already in the pipeline.

Salvatore: The small logo that is attached to your designs appears to be an upside down brief? How did you come up with your logo? Are you implying that you are about to turn the industry upside down? If so, I like your style!!!!

Alex: You got it! The Krakatoa tag on the side is a volcano/upside-down brief. We came up with Krakatoa because I think guys were ready to move from having a guy’s name on their undies to put a volcano in their pants. You know, eruptions, loud noises, very masculine things. Besides, Krakatoa is a freaking badass volcano.

And our goal is not to make pretty pictures or hang some hunks on posters and try to attract on looks alone. Krakatoa is about the experience. The fact that you can barely feel it under your clothes and that you don’t need to adjust or shuffle all day.

Tim: One thing we spoke about prior was you want all guys, regardless of orientation to be happy in their undies. How are you making this happen? What kind of guys are wearing your underwear?

Alex: You are right, our goal from the start is to make an underwear for everybody. We didn’t want to pigeonhole the brand, but let it just deliver the message. We have pilots, cowboys, techies, movie directors, doctors, lawyers, welders, drivers as users. We have hetero, gay, post-op trans men. We have all the beautiful skin colors wearing it proud.

Salvatore: What led to the uber creative name you have chosen?

Alex: I saw a movie when I was a child about the Krakatoa eruption. That really brought that cataclysmic event to my attention. When coming up with a name for our new brand. We wanted something masculine, powerful, that demands respect, and Krakatoa fit the bill perfectly.

Tim: Which leads me to your slogan, “Put a volcano in our pants.’ How did you guys come up with this slogan?

Alex: After the Krakatoa name was secured. Putting a volcano in our pants became an insider joke quickly. When we told some people about it and their reaction was simply priceless, we decided to trademark it.

Tim: Where can our readers find you and your undies?

Alex: You can find Krakatoa on our website, www.krakatoaunderwear.com or on Amazon.com too. We are thrilled to be interviewed by Underwear News Brief. We appreciate the opportunity to present our product to your incredibly underwear-educated public. Krakatoa is the labor of love of just two guys, and we hope we can bring something special to your audience.

NOTE: We have are going to review the Krakatoa Underwear! We received them and will have them over the next two weeks! After Labor Day!