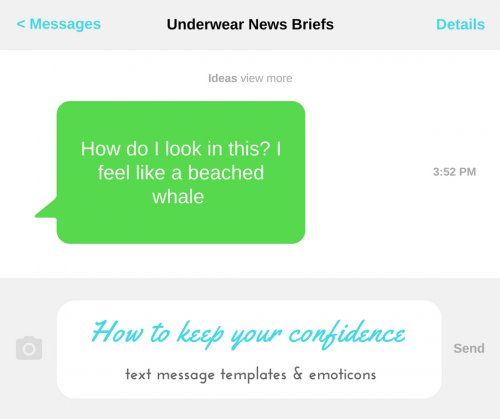 We all can’t be an underwear supermodel all the time. We go through phases where we put on weight and look at ourselves in the mirror and go “I just can’t today.’ We hate what we see in the mirror. The underwear doesn’t even look like the pair we bought. It’s like someone broke in and switched out all of your underwear for a few sizes too small. Sometimes we wear it anyway and other times we just put on something quick.

So what do you do when you don’t feel your best either short or long term? I am going through that now and want to share some wisdom with you guys.

You have the power to change it

If you are able and healthy, you have the power to change both your physical and mental well being. Sometimes its short-term like holiday pounds and other times it revolves around just getting through life. You have to buckle down and do what is important to you. I personally have reached the point in my life, I want to change things. I weigh probably the most I have ever weighed and it sucks. I had a lot going on and didn’t want to deal with what was in the mirror. But, it doesn’t go away. I had to realize I needed to change.

Here is my plan:

Talk to friends about your issues

I think a lot of times we fall off the wagon with anything, not just weight. We have a lot of other issues we don’t want to deal with at all. Mine dealt with a few health issues (nothing serious), money, and career. I opened up to friends and told them everything I was feeling. It made me feel better and I didn’t turn to food or drinking to solve those problems. Let me say that depending on your issue you may not be able to talk to friends but turn to someone. Issues about health (serious issues), sexuality, and gender identity you may need to seek out someone who has been where you are at now.

I never have anything go to plan. It’s just a fact of life that something will go wrong and there will be setbacks. You just have to push through and keep going. Its hard as hell sometimes, but if you want to accomplish anything you have to keep the momentum going. And don’t punish yourself if you fall off the wagon. Just get up and keep doing what you are doing. If you give up all your hard work will be for nothing. There are many times I ate something and was like “Hell, fuck it now, let’s eat these cookies.”

Reward Yourself for accomplishing goals

This may all sound “Pollyanna” and Sunshine. Just know I’m one of the most “glass half empty” people you will ever meet. Even the glamorous life of an Underwear Blogger may not go to play (said sarcastically) I just rarely share really personal things and want to open up to you guys more. Thanks for reading guys!