There are many European Brands we never hear about in the states. There is one brand in particular that has popped up on my radar. That brand is Intimissimi, which is an Italian Lingerie line based out of Italy. They have both men’s and women’s underwear.

The first time I heard of the brand was with talking with Alec. Alec did one of our first Brief Tale podcasts. He loves classic cut undies. During one of our texts back and forth I asked him what his favorite brands was and he mentioned Intimissimi. I had no clue who they were. But the classic cuts he wore were super sexy.

And then my all time favorite that I never get tired of that is constant day in day out is Intimissimi. And I just absolutely love them.

I love, love, love their stuff. It is. I mean, like you would expect an Italian brand to be, it’s perfectly executed. Every pair is like a little piece of art. I mean, they are just the most comfortable I’ve ever worn and I’ve, I’ve worn them for, I guess, gosh, I’ve had, I’ve had their stuff for maybe 10 years now. I started buying it. And when I would go to Italy or when I was in, if I’d be in Germany or, you know, somewhere in central Europe

Then the next time I heard about them was with Stevie aka Undies Cub. He found them in his travels, he’s our world traveler! Then told me they make this amazing Mickey Mouse Swim Brief. Quite a few of the podcast boys bought the Mickey swim brief, myself included.

About three weeks ago I was surfing the Intimissimi site and saw they had briefs for $7, which were regularly 22 dollars, and the Mickey Swim Briefs were $11. I got these for under $20!! I am on a budget right now due to COVID and being underemployed (I know many are in the same boat). The only thing to know is shipping was $8. I hear some of you out there going, WHAT? But, it’s coming all the way from Italy. $8 for international shipping is a deal!

After getting the briefs and wearing them I know why all three of the guys love them so much. They are the highest quality in fabric and construction. I am seriously impressed. This is a brand I will be getting more pairs from in the future. The classic cut and amazing fabric make Intimissimi a winner!

Intimissimi is a brand that keeps coming up in the last month. It first started with Alec, then Undies Cub and now Hunter Bigham. This is a brand from Europe making amazing classic cut undies, and making them very well. I have heard nothing but raves about this brand from everyone. Check them out. 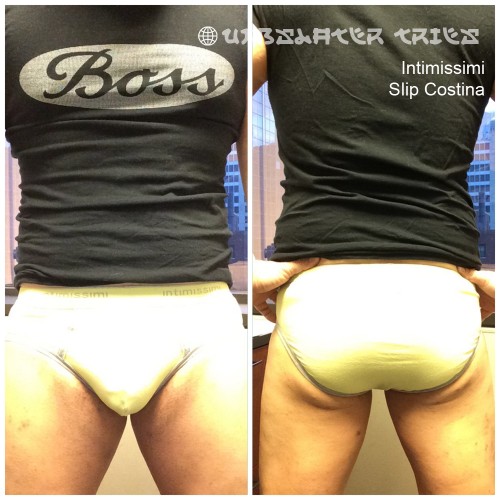 I know a lot of you guys are like me and you get a lot of spam about underwear in your email boxes. Some of it is stuff you can delete right away. Another 10% off sale? Yawn. But sometimes, you get something so intriguing that is just so irresistible that you have to click through to see what the heck is going on. For me, there has to be some catch, something that says the underwear that is being offered will stand out from amongst the rest. Something like a great pic or key words will pique my interest. In this case, the words were: Italian and underwear.

Honestly, when I see promotional marketing emails from European sellers in box. I’ll click through the email and onto the sites faster than a 11 year old girl would start crying at Justin Bieber concert. Yes, that fast.

So began my foray into the brand called Intimissimi. I was a little familiar with the brand before, I’d seen the storefronts whilst traveling through Europe. But the storefronts always reminded me of the standard lingerie purveyors, like Victoria Secret. So I tended to shy away from entering if I wasn’t sure there was going to be a substantial men’s section. 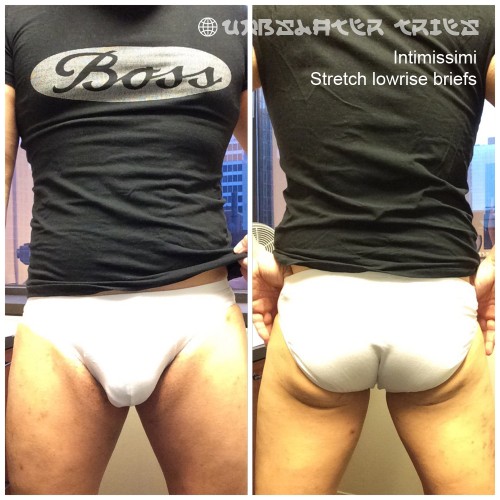 My curiosity about was sated as I arrived on the Intimissimi website (http://us.intimissimi.com/index.jsp) , where they proudly proclaimed that they were now shipping to the good ole’ USA. How was this not a sign from the Italian underwear gods urging me to order a couple pairs?

I always check out the “about us” section to get a feel like if the brand’s been around for a while, and if they are legit. Sometimes just the look and feel of a website clues you in to how serious a company takes its online presence, and how much faith you, in turn, can put into ordering, especially if the merchandise originates overseas.

My sleuthing uncovered that the company has been around since 1996, so solvency was not going to be a problem. And like I mentioned before, they seem to be all over the place in Europe. At the time that I made my purchase there was a limited selection of trunk and brief style underwear for purchase. In terms of design, they were rather basic, with solid color bikinis and briefs in either solid colors or ringer styles (contrast piping on the fly and leg holes). They were also running a volume buy special, where you could buy five pairs for $65 USD. So I went ahead and picked out my five pairs (two bikinis and three briefs) and eagerly awaited the arrival of my purchase. 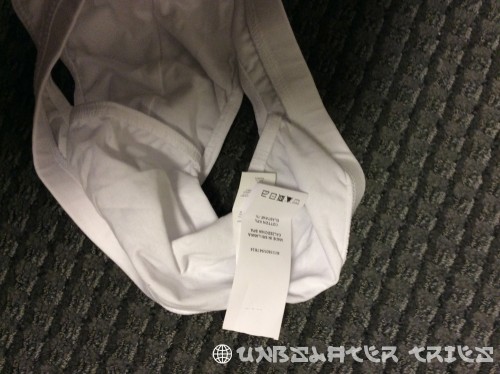 I was very confident in my transaction, the website felt very secure. It employed a double verification system (e.g., Verified by Visa) and provided a receipt was instantaneous and included a URL to track the order. All of these features of their website and customer interaction made me confident that my order would arrive and that the company was legitimate. Shipping was only $8.

I received the garments and a half and was impressed by the speed of the delivery. Since they are coming from Europe, and that I only paid $8 for delivery. They didn’t really have packaging, just the individual briefs and bikinis in plastic baggies. I’m a US size 31-32, so I ordered the size small, and they’re solid garments. They fit as expected: not too snug, with the expected coverage that both styles are expected to offer. The briefs have pretty full coverage in the back.

My one gripe is the excessive tagging of the garments. Each garment included a longish tag that indicated the size and care instructions of the underwear, and another long tag describing the origin and fabric content of the garment. It just seemed rather excessive, but nothing that a quick clip of the scissors couldn’t remedy.

I’ve since received emails from Intimissimi notifying me that they’ve released new styles for spring, that feature prints and stripes. I’m definitely excited to try out more of their stuff and hope that you’ll want to try them too.