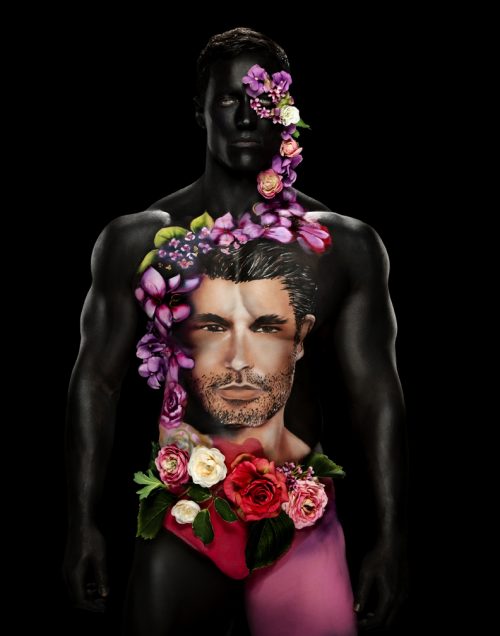 We got a chance to interview photographer Mike Ruiz. You may know him from his celebrity shoots or his brand new app called “Pretty Masculine”. We talked to him about the new app.

The app “Pretty Masculine” has been out and is full of amazing photography. How did the idea for the app come about?
Pretty Masculine was inspired by my desire to reinterpret and deconstruct the idea of how masculinity is defined by society. I started the project as a coffee table book, and based on its success, decided to take it a step further. I sought (and continue to seek) to redefine that which has become stereotypical. It not only encompasses males anymore. It’s about looking at everyone from a different vantage point–it’s about considering how we look at and interpret different people from all walks of life.

Pictures in the app take a lot of time to set up (body paint, hair, etc), how long is an average session for one shoot?
There’s no simple answer to that question. From planning to execution to post production, it takes a VERY long time. Make up alone in and of itself may take three  to four hours…The focus is really on the finished product. It’s completely an artistic endeavor. Art for art’s sake, I’d say.

Pretty Masculine is very creative in the shoots in the app, where do you get the ideas for each model?
The ideas come from various sources. Some of them germinate out of my imagination, others are part of a collective collaboration between myself and each of the artists involved.

Have there been any ideas that were too complex to do for a shoot for the app?
Granted, some ideas behind the images (at least in my opinion) have translated better than others but the execution of all the ideas have, by and large, come together pretty seamlessly. In my opinion, no idea is too complex, when there is the will to execute them.

What have been some of the shoots more memorable shoots for the app?
Every shoot has proven to be memorable. They each have become a journey of discovery for me. The excitement I felt creating the very first shoots were great but each subsequent one has been equally gratifying. Sometimes it has been hearing the stories behind the various models and artists that has provoked some inspiration in me, or at times, it’s just been the wonderment of seeing so much talent gathered in one room for a common cause bringing to fruition an extraordinary project. Not to mention involving important people in my life, such as my dad, my partner and even my sweet pitbull Oliver!

Do you have a favorite picture in the app or is it like asking to pick your favorite child?
Absolutely impossible to show any favoritism. There is no one picture I could separate from any of the others. They are all an intrinsic part of me.

How often do you update the app with new content?
The app is updated with new content every three or four weeks. The way I see it, it is as a fully interactive gallery where the user can revisit and see new additions to a constantly evolving exhibition of work in progress.

Is there someone model/celebrity/actor you would love to shoot for the app? If so what would you do with them for the picture?
If I felt like it was right for the project, I’d never say no to including celebrities into the Pretty Masculine app but that’s not really the direction that the app is going for. I have become  fairly established as a photographer who shoots plenty of celebrities (and known for doing transformations on them), so I wanted this to become a platform for something different. The purpose of the Pretty Masculine project has been to do really hone in on the unexpected. I feel that in time, as the project continues to evolve, people will see this. They will get to experience with me, in real time, the arc of my work in deconstructing societal preconceptions of masculinity and femininity. That is, showing the inner beauty and uniqueness of people from all walks of life. However, that being said, celebrities are just like you and me…so, why not? Maybe at some point I’ll ask some if they want to jump on board (smiles).

Lastly, I will ask this for some of our readers, are you going to have an android app?
Definitely! My developers have been working on putting together a version of the app that will be compatible with Android devices as well. Stay tuned! It’s coming soon. Promise!