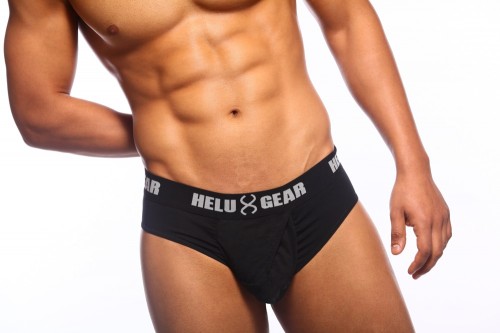 What made you go into the world of men’s underwear? Where did the inspiration come from?
In the past I had a large variety of underwear that either had a comfortable contoured pouch or were flat but included a fly. One morning when I was getting ready for work I was thinking about how busy my day was going to be when trying to decide which pair of underwear to wear for the day. I chose the uncomfortable flat underwear because I didn’t want to waste extra time at the urinal readjusting and untucking my shirt from my underwear, which seemed to happen more often than not when using the “up and over method” since my job required my shirt to be tucked in to my pants. I searched extensively for underwear with a contoured or ergonomic pouch that had a fly that seemed like it would actually be usable with no luck. After that I decided to work on a better design.
So tell our readers about HeluxGear?
I began my work on Helux Gear in 2012. The name is partially inspired from the design of the pouch which resembles a double helix. I think of the design as the next evolution of men’s underwear which ties in well with a double helix. It’s also a luxury for men compared to previous options so joining the words “he” and lux” was the third among among many other reasons for choosing the name.The Helux Gear kickstarter campaign in 2013 helped to fund the first order of production.
How did you design the pouch?
I tried a lot of various designs, some of them didn’t work well at all. There was a lot of trial and error, as there is with any new product. Even after finding the winning design, there were still many adjustments that needed to be made to lengths, angles, & elasticity.
What has the feedback been on the pouch design from your customers?
The feedback has been great so far. Our customers really seem to love the pouch, not to mention the waistband. Many of our customers that buy a pair or two come back and buy a week supply or more.
Are you planning to add more colors to the line up?
We are planning to add more colors to the line up in the future. We’re currently surveying customers to find out which colors they would like to see. New colors options are estimated to be available in late 2014.
Which style has been your best seller?
Boxer briefs have been the best seller, but the trunks and briefs aren’t far behind.
Where can our readers find you?
The best place to find us is www.heluxgear.com. We ship internationally and have a mailing list to keep our subscribers up to date on our current sales and promotions. Your readers in the Netherlands & Belgium can also find them at InUndies to avoid paying international shipping.