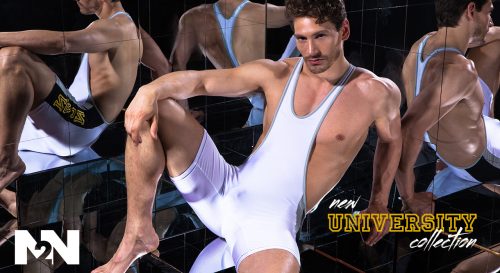 The University line from N2N Bodywear could be considered a classic line. It has been in the N2N Bodywear line up for as long as I can remember. When the 2016 line came out and it was missing, I thought. NOOOO! Not the University. How could they do away with such a classic design!

The cuts to me are ones you would see in collegiate athletics. The swim brief could be worn back in the day when they wore swim briefs to compete in them. The singlet reminds me of some singlets I remember seeing in catalogs years ago. I won’t go into the discussion of a singlet. I have done that many times. The University singlet is a low cut singlet. The jammer is something you could see on swimmers today. The Olympics has shown swimmers compete in jammers but train in speedos. Lastly are the runners, I say it’s a sexier cut than regular runners. But, that’s just my opinion.

As, I stated above, the styles haven’t changed just the colors. This year the colors are amazing. They include Charcoal, Royal and white. The Royal really pops. It’s my favorite color since they had green! But, any of the colors in this new collection I would be happy with owning.